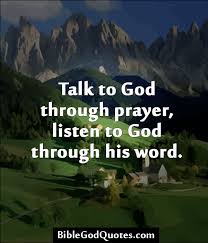 VATICAN CITY, March 17 (CNA/EWTN News) .- During his visit to the Roman parish of Our Lady of Oration on Sunday, Pope Francis emphasized the necessity of listening to God, and encouraged attendees to make time every day to read the Bible.

“What are the responsibilities of a Christian?” the Pope asked in his March 16 homily.

“Maybe you tell me: go to Mass on Sundays, fast and abstain during Holy Week, do this…But the first responsibility of a Christian is to listen to the Word of God, listen to Jesus, because he speaks to us and he saves us with his Word.”

Emphasizing in his homily the importance of listening to the Word of God, the pontiff explained that by doing so the Lord “makes our faith stronger and more robust.”

Observing how there are “So many things we listen to during the day,” the Pope asked the parishioners if they could “take a little time, every day, to listen to Jesus, to listen to the Word of Jesus?”

Echoing part of his Angelus address earlier that day, Pope Francis encouraged the congregation to carry a small Bible with them in their “pocket” or their “purse,” so that they can read it whenever they “have a little bit of time,” suggesting “maybe in the bus.”

“When you can in the bus, because many times in the bus we are a little forced to maintain balance and also to defend our pockets, no?” he noted, “But when you sit, here or there, also read during the day, bring the Gospel and read two little words. The Gospel always with us!”

Highlighting how we are “invited to listen to Jesus,” the pontiff observed that “with his Transfiguration” the Lord “invites us to look at him,” and that “to look at Jesus purifies our eyes and prepares them for eternal life, for the vision of Heaven.”

“Maybe our eyes are a little darkened because we see so many things that are not from Jesus” and that “counter Jesus: mundane things, things that damage the light of the soul,” the Pope continued.

“And here this light slowly fades and without knowing it we finish in interior darkness, in spiritual darkness, in the darkness of faith: a darkness because we are not used to looking at, imagining the things of Jesus.”

Concluding his homily, the Pope repeated his petition for those present to read the Bible, and encouraged them to listen to and watch Jesus, imagining “how he was and how he did things,” so that both intelligence and heart can go forward on the path of hope.

BE GOD’S HUMBLE AND FAITHFUL SERVANT

Daily, unceasing prayer and 30-minute reflection are so we can listen to God.