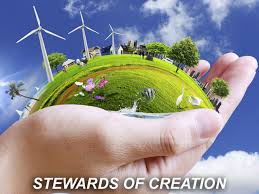 Catholic Exchange, June 30, 2015. Based on the beautiful words of St. Francis of Assisi, “Praise be to you, my Lord, through our Sister, Mother Earth, who sustains and governs us, and who produces various fruit with coloured flowers and herbs” (paragraph 1), Laudato Si has already stirred up intense controversy and conversation. I’d like to add my own understanding and reflection on this encyclical.

I want to be clear that I’m not getting political here. I recognize the political implications of this encyclical, but I truthfully read the document as a Catholic first. I think, in order to comprehend something that may be contrary to our personal or political beliefs, we must ask the Holy Spirit to open the eyes of our hearts. Politics has its place, certainly, but not here.

I find it incredibly sad that the magnitude of sin that afflicts our environment continues to be politicized on both ends of the spectrum. Why can’t we just see the Earth for what it is: God’s gift of creation for us to care for, not destroy recklessly? When I was in elementary school, my friends and I started an environmental club called KidsCare. We held an informal meeting on a weekly basis in order to educate ourselves about plants and animals in the natural world and then our families, followed by our neighborhoods. The result? Our families became more intentional about what we ate, how much trash we gathered, and what items could be reused or recycled. My friends and I protested against littering in our neighborhoods and organized a clean-up day.

None of this was based on political persuasion. Rather, our hearts were open to the message that all of creation must be valued and protected. My family was always vocal about being pro-life, and it was that respect for the dignity of human life that propelled us to care about the rest of the Earth and all it contained. My friends and I realized that God bestowed upon humanity this wondrous Earth, but we were called to be stewards of the Earth rather than careless consumers.

Beyond Politics: The Value of All Creation 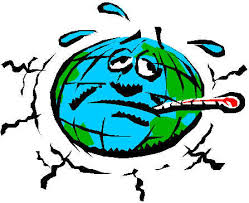 Ecological stewardship is the underpinning of this encyclical. It’s true that Pope Francis supports the claim that scientific research widely concludes that climate change is a product of human influence rather than the natural cyclic patterns of hot and cold. But I think the wider message that he is desperately trying to reach to the world is that we have to recognize that the Earth is a reflection of our modern sins. The Earth is suffering – visibly, terribly – because of Original Sin and personal or social sins.

If we all continue our political banter surrounding the topic of ecology, then we miss the cry of the Earth of the sickness of sin that is destroying everything. It began with humanity, and now our personal sins have severely afflicted our planet, which has translated into genetically modified organisms that we eat (which are unnatural), chemicals and hormones in our water (largely due to contraceptives in waste that aren’t completely filtered), pollution and pesticides, and our frenzied pace of living (which isn’t really living at all).

It’s not that Pope Francis is claiming that the planet needs more attention than humanity does, but he is prudently acknowledging that we cannot simply ignore the effects of our consumption, waste, and neglect of spiritual truths. We have become slaves to our technology and comforts, and we give little thought to the consequences of our behaviors toward others or our environment. This is the crux of Pope Francis’s message in Laudato Si.

According to Patriarch Bartholomew, “to commit a crime against the natural world is a sin against ourselves and a sin against God…He asks us to replace consumption with sacrifice, greed with generosity, wastefulness with a spirit of sharing, an asceticism which ‘entails learning to give, and not simply to give up. It is a way of loving, of moving gradually away from what I want to what God’s world needs. It is liberation from fear, greed and compulsion’” (paragraph 8).

The implications of our compulsions, then, lead to environmental and social destruction (and even desecration), as well as our personal decline. What beautiful ideology to suggest tempering our societal sins with the virtues of sacrifice, generosity, and even generativity – perpetuating our gifts and talents to and through our progeny. But it’s clear that this cultural shift in morality will not occur instantaneously; Pope Francis warns us that “the problem is that we still lack the culture needed to confront this crisis” (paragraph 53). 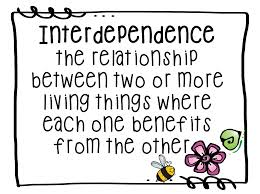 The Need for Interdependence

Most of us live according to a rule of dependence or independence. Dependence, in a pathological sense, involves co-dependency and unhealthy enmeshments with others so that we somehow lose our identity in someone else’s life. (And I’m not speaking about the total abandonment to God’s Providence here.) Independence, of course, has become likened to a god, because our society highly lauds our ability to be autonomous. The unspoken message is clear: You don’t need anyone else. You can do everything for yourself.

Both of these are fallacious, of course. But how do we move from dependence and independence to interdependence? Interdependence requires a healthy balance between self and the other, and this includes the beautiful wildlife of the sea, sand, soil, and sky that inhabit our dwelling spaces. Yes, we were given rule over the rest of creation, and certainly all of creation is under our submission, but we have misinterpreted what it means to have “dominion” over the land. To “till and keep” (Genesis 2:15) means we are to cultivate and care for the earth, which is the Lord’s. We have taken this natural care and respect for our environment to a state of disrepair: We’ve fallen from proper use to abuse.

Interdependence is a type of harmony, a cadence in which we dwell among the creatures and plants without intentionally and uselessly harming them. We somehow gain a proper perspective that all of life is God’s gift to us, so we must lovingly care for it. Interdependence requires that we view all living things through the lens of gratitude to God and loving discernment of how He is calling us to use the resources He has given us.

Moreover, Pope Francis explains how the tainted quality and lack of natural resources affects the impoverished people of the world. It truly is sinful that there are those of us who waste food and water while others are starving and do not have access to clean water. If we continue to poison and pollute the Earth, we continue to harm our poor brothers and sisters, as well as ourselves.

Pope Francis brings to light a valid concern regarding environmental degradation as it relates to human poverty. There are many theological, sociological, psychological, and ecological dimensions to this encyclical, all of which must be pondered and addressed in an ecumenical fashion. In fact, Pope Francis summarizes this thought by saying, “we have to realize that a true ecological approach always becomes a social approach; it must integrate questions of justice in debates on the environment, so as to hear both the cry of the earth and the cry of the poor” (paragraph 49). He’s not promoting pantheism/eco-worship; he’s asking for ecumenism and solidarity with the poor.

We simply cannot maintain our complacency about the growing global crisis that has affected all of creation, most of all humanity. To continue to live with apathy will not shift the current cultural paradigm. “This is the way human beings contrive to feed their self-destructive vices: trying not to see them, trying not to acknowledge them, delaying the important decisions and pretending that nothing will happen” (paragraph 59).

Instead, I believe we should permit the Holy Spirit to shatter the political stereotypes we have contrived and humbly implore that He opens our eyes and our hearts to the plight of humanity as reflected in all of creation. The Lord certainly speaks to His people through natural events (as is evident in Scripture); perhaps it is time we start listening to what He is telling us through them and respond with concern and charity.

WHY IS MARRIAGE INDISSOLUBLE? WHAT THREATENS MARRIAGE?

WORK SHOULD NOT BE OUR ‘BE-ALL’ AND ‘END-ALL’