EVEN IN SICKNESS, SERVICE IS NOT OPTIONAL

Service became my second nature when I fell in love with the Lord during the BCLP. So instead of frowning when we have no business projects to do, it turned out to be an opportune time to serve the Lord even more. I may be often the last choice, but I can’t find the reason to say “NO” and my “YES” leads to one service after another.

Even though my best that comes with my every “YES” is not always enough, the Lord assures me victory as He said in 2 Cor 2:14″God always leads me in triumph.”

In fact, if God is bringing me to where I’m called for, He will bring me through it. 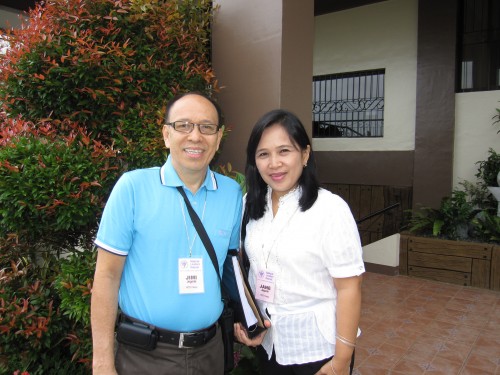 Accepting a Chapter Head service was not a big deal to me. However, 3 months after my term in 2010, while serving as Breakfast head, I had to have an operation to excise a 6.7cm mass in my colon; it was diagnosed as a Lymphoma. Instead of undergoing Chemo Therapy, I opted for Holistic Healing where faith, trust and discipline play a major role. I changed my life style – eating mostly vegetables, fruits, fish and white meat except pork.

I had no worries, because the Lord told me, during my first AGM after discharge from the Hospital, in John 11:4 – “This sickness is not to end in death, but for the glory of God, so that the Son of God may be glorified by it.”

During this tough time, I still managed not just to maintain good standing in the BCBP; I never missed or reduced my tithes, and still held onto the demands as breakfast head.
Then came another invitation to serve as Regional Council Director starting Jan 1, 2013 for another 3 years. With that offer,I had this prayer “Lord you knew that I cannot say “NO” to serving you, but before I commit, please help me see myself fit for this new calling.”

However, a few months before my installation, I developed a mass at the base of my tongue that was found out to be another malignant Lymphoma AGAIN. Bros & Sisters, even when our business, our family and everything around us seems to be okay, if your Doctor says you have cancer – this time very aggressive, it is entirely a different story. Yet I was asked to serve a step higher in BCBP service. (…what would you think?…)…

Really! There were big questions marked on every wall.

When I turned to the Lord in prayer, and asked “Are you telling me I am not the one?”, He spoke to me in 1 Chronicles 28:20, “Be strong and courageous, and do the work. Do not be discouraged, for the Lord God is with you. He will not fail you nor forsake you until all the work for the service of the temple of the Lord is finished. ”

I realized then, my cancer was Satan trying to give me a reason to say “NO”.

I accepted the call for RCD and I agreed for an immediate Chemo Therapy treatment, when another fast-growing mass started to appear after 2 months beside the 1st excised mass. While having Chemo Therapy, I served as NAC 33 Secretariat and was still able to develop the Online Registration Program which is being used also by NAC34.

My 6-cycle therapy was completed last July 5th, 2013 and I was declared clear in 2 – quarters consecutive monitoring. God willing with expectant faith, the best in me will be unleashed according to His plan.

Finally, I realized that even in sickness, service is not optional. His greatness will exemplify to restore us and supply us with strength to ensure His glorious victory.

To God be the glory!

To God be the Glory. Whatever you do for the kingdom of God never goes out in vain. You do service out of love like our Lord Jesus did. God is faithful to you because you never lost your faith in every trials. God put those revelations in your heart and you obey…here I am Lord use me. What a great God we serve.