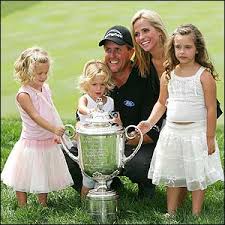 Phil Mickelson should be a role model for our BCBP Christians In Golf Association, CIGA.

Let’s forget about Tiger for while – I guess we have had too much of that, for now at least. Let’s take a look at Phil.

Phil Mickelson won his third Masters Green Jacket at Augusta last Sunday 11th April. That super shot from under the trees, flying over the water onto the 13th green for a possible eagle, was a memorable feat. He didn’t make the green but he had certainly made a birdie. However, as I continued to watch, this feat was almost completely erased by the movie-like ending scene at the edge of the 18th green. That was the picture of Phil Mickelson embracing and kissing his wife, both of them in tears, their children soon joining them in a group victory hug. Phil’s wife, Amy, has been battling breast cancer but she had bravely joined the crowd to watch her husband’s moment of glory. That embrace gave this Masters its cinema blockbuster-like ending. As Mickelson’s winning putt went in, the commentator said, “a victory for the family.”

CIGA and other BCBP golfers are quite family-oriented. Some refuse to play weekends because of a “deal” with the wife. Some can’t stand being away from the family even for a day or two. But if its only six hours (in the fairways of course) that, they will say, is always forgivable. For CIGA in particular, the golfers’ wives, are a relatively close knit group and form a vital part in the chapter life of Makati. Two wives (Libay Robles and Rusel Rubin) and three sons (Jay Avellana, Vince Gustilo and Patrick Rubin) as well, get to play with the dads once in a while.

Some commentators and post-game analysts could not resist comparing the scene to a morality play: Mickelson, the complete family man, winning over Woods who is now going through a self-inflicted marital crisis. This year’s Masters began with the media buzz about Tiger Woods’ serial infidelities and ended with a victory for the Mickelson family. Fate rewards the good over the not so good – this age-old theme was re-dramatized. It was, indeed a fitting ending for one of the most important tournaments on the PGA tour.

The press says that Mickelson did not allow his wife’s ailment to be a burden to his game but rather an inspiration instead. Amy took time away from recovery to stand at the 18th green to give her husband a victory embrace.

In a way, we all can truly relate to this – even a handicap 28 guy like me. But I did the reverse; I did not let golf be a burden in my spending time with taking care of Tess during her recovery. I did a golf fast, it was Lent anyway. When I had my first game after the fast, I was immediately rewarded with a Class C trophy and new flat screen TV.

As an update, Tess’ wounds are still healing after a second procedure to clean the suture wounds over the Holy Week. And we still visit the doctor quite often. Most of all we are pleasantly surprised and comforted when we learn that BCBP members have never stopped praying for us unto this day.

My life is fun and sort of complete, as a Golfer with the BCBP Makati Golfers group aka CIGA (Christians in Golf Association). It’s like a hidden surprise, a secret promise undeclared; this revelation renews itself when I give the talk or listen to “the BCBP way of Life.” I like to think my life represents a complete cross section of Life in the Makati Chapter and perhaps soon from other chapters. Members hail from different action groups, almost all are active breakfast goers, some are on the governance team, and even one or two are holding national positions in one way or another. To this day, it not uncommon that most of us hit the fairways after a BCBP breakfast or rush back to Makati after a game to attend the Chapter assembly. And to complete the golf and family picture, five (out of ten) of the Fathers in Family Encounter Batch zero, the pioneering group for FE in Makati – are golfers.

Tess is yet to go back to work this May to ensure a complete recovery. I sometimes fancy if I could do a “Phil Mickelson” – to let this miraculous recovery inspire my game the way it did my being more active in BCBP life. Chairman Larry Arceo handed me my THIRD Class C trophy during last week’s Chapter Assembly (achieved in the fashion described in the previous column). This might work after all. I’m happy with Class C.

ROLE MODELS WANTED ON MAY 10

WE ARE GOD’S CHOSEN PEOPLE!