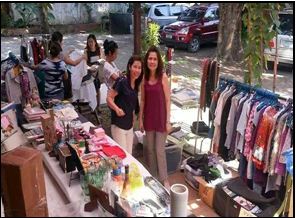 BCBP Cebu Central Chapter continues to find ways to support its Masbate Outreach.  Last August 9, 2014 the Chapter held a garage sale.  It all started on a Sunday fellowship, a laid back afternoon chat among sisters that later led to the possibility of organizing a benefit garage sale for the Masbate Mission. We all got so excited yet anxious as this will be the first-ever event of the chapter.  Immediately we had eager volunteers who were willing to donate varied personal stuffs such as housewares, home and kitchen decors, ladies and men’s clothing, shoes, bags, belts, books, children clothes, toys and a lot more. A seasoned garage sale organizer has aptly named it as pre-loved items which even made it more convincing. A meeting took place last August 4, 2014 to finalize the items to be sold, pricing decisions, labeling and cashiering. Flyers were distributed to other BCBP chapters and announcements were made for proper dissemination. The core group gathered on the eve of August 9, most of them with their sale items in preparation for the next day event. Saturday came with excitement and angst as we all were ready for the showdown.

To start with, a tarpaulin was visibly displayed outside the premises of our venue, Don Mertos Restaurant / Casa Escano. We utilized the corner garden area of the restaurant to create a cozy and cheerful appeal. Tables were set in a row, hangers, clothesline and racks were in place. Items were artistically displayed, labeled, sorted and sectioned for better visual presentation. At first, there was only a slow trickle of customers, some were walk-ins, others were regular breakfasters and a few who were just checking out and curious. Pricing was reasonably good as it ranged from Php50 to Php400 and others sold for a song. A trickle became a steady stream of customers in frenzy, happily carrying their find, others simply rifled through discards that were selling like pancakes. It was a joy to see them patiently plunging, picking, thinking, and looking for something they could have, owing to the price cuts made on this sale day. The outcome was overwhelming as it was beyond what we all expected, a proceeds of about Forty-Eight Thousand Pesos (Php48,000).  It all went to the Masbate Mission!

It was a long day for us indeed, tired yet inspired for we knew it was a cheerful way to share and to be blessed. We wrapped up the day with a short praise and worship and a prayer of thanksgiving to a loving and faithful God who has allowed this to happen. Kudos to the core group who had pooled their time and efforts and thanks to all those who supported us through their donations and to the buyers who contributed to a successful undertaking. Many were asking for a repeat performance, why not?  Plans are underway for a pre-christmas sale before the year ends. Now it’s time to de-clutter for a cause which should be your to-do-list soon.

Thanks to all and To God Be the Glory!

BCBP SONGS YOU SHOULD KNOW – #4