GOD IS MY PILOT IN COMMAND

October 11, 2014. As I write this article, I’m inside the comfort of my room in Mactan, preparing for my next flight to Narita, Japan. Closely monitoring tropical storm “Vongfong”, considered to be the strongest typhoon so far for 2014, which is moving close to my intended flight path and the weather forecast in my destination, i can’t help but imagine how bumpy this flight will be. 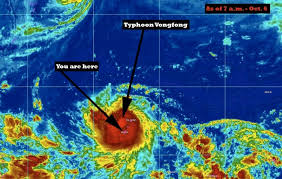 I am not afraid. I draw my strength from the Lord who gives me assurance of safety… and it will be my second bout with Vongfong.

Five days earlier, the day of the SMMR Praisefest, I flew to Guam. The night before, i had dinner with the family. I never had time to check on the weather for the Guam flight. Upon reporting to the flight dispatch at around 6AM of 06 October, my co-pilot ask me if we will push through with the flight. I was surprised and ask him why. He said, “Don’t you know there’s a big storm over Guam?” He showed me last night’s weather map and pointed to the big red blob covering the entire island of Guam. It was typhoon “Vongfong”. Silently, I uttered “God help me.”

I was generally in a “Go” attitude, but my co-pilot did not share my view. With 85 passengers for Guam, the decision to cancel the flight is not easy. At least we have to try. So we monitored the storm and communicated with Guam airport for weather developments. As soon as we were given a green light by dispatch, the flight and cabin crew were already inside the plane ready to accept passengers.

Along the way, I was reviewing my notes on “what to do inside thunderstorms” just in case. While doing so, my co-pilot was telling me horrible stories about weather-involved aircraft incidents. This gave me more resolve to come to God in prayer.

2 hours into the 3-hour flight, Traffic Control sent us a SIGMET, significant meteorological report, telling us the the typhoon was moving North North-west at 19 knots. Typhoon VongFong was moving away from Guam. Approaching Guam, we were met with strong winds, but not as gusty as anticipated. The approach and landing were smooth. At the airport, I was surprised to see that we were the only aircraft there. I approached one of the Homeland Security personnel and asked what happened here. He said that all flights into Guam was cancelled. We were the only flight to land.

Upon checking out at immigration, an old lady approached me and commented on how smooth the flight was. I was quick to respond, “Thank you po, but I’m only the co-pilot.” It was Jesus Christ who was my Pilot in Command.

We flew back to Manila, arriving just in time to attend the Spirit-filled SMMR Praisefest.

In Philippians 4:6-7, we are reminded “Don’t worry about anything; instead, pray about everything. Tell God what you need, and thank him for all he has done. Then you will experience God’s peace, which exceeds anything we can understand. His peace will guard your hearts and minds as you live in Christ Jesus.”

As I prepare to meet Vongfong again in this flight which is about to depart 3 hours from now, I can’t help but praise the Lord for I know He will be my Pilot in Command.

AFTER THE BCBP BFAST, WHAT NOW?

IN THE BCBP, WHAT IS OUR END-GAME?

THERE IS ALWAYS SOMETHING GOOD TO DISCOVER