Blessed Peter Calungsod: A Model for Today’s Youth
Archbishop Anthony Apuron of Guam Speaks on the Life of Filipino Saint 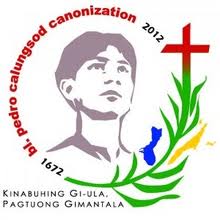 VATICAN CITY, OCT. 19, 2012 (Zenit.org).-This Sunday, Pope Benedict XVI will welcome seven new saints into the Church. Among them is Blessed Pedro Calungsod, a young Filipino missionary who at the age of 18 was martyred for the Faith alongside Blessed Diego Luis de San Vitores in 1672. Blessed Pedro was killed by a local Chamorro chief in Guam who was infuriated by the missionaries’ presence on the island.

Yesterday, several hundred pilgrims from the Philippines gathered in the Church of St. Augustine in Rome for a Mass celebrating the life of Blessed Pedro. Among the prelates concelebrating at the Mass was Most Reverend Anthony Apuron, Archbishop of Agaña in Guam, the island where Blessed Pedro was martyred.

Archbishop Apuron spoke with ZENIT on the life of Blessed Pedro, its significance in this Year of Faith, and the impact of the current Synod of Bishops that is currently being held in Rome.

ZENIT: How do you feel about the canonization of Blessed Pedro Calungsod?

Archbishop Apuron: I think it’s a moment of pride. I know for the Filipinos, and especially [those] in the Visayan region and just today before the mass several of the bishops said, “We should really thank you, you should not apologize for us (the Chamorros) killing Pedro Calungsod but thank [you] for giving us a saint.” So now the universal Church will really have a saint to look up to and Pedro is 18 years old. He died about a minute and a half before [Blessed Diego Luis de] San Vitores because they killed him first to get to Blessed Diego. So he really is the proto-martyr and so we call him a precursor in heaven for Blessed Diego because he left and went before him to heaven to his martyrdom. So it’s really a moment of joy, we’re very happy for all the Philippines but especially now for the universal Church. I hope that he can really be model for young people today that we’re all called to be saints someday. And for Pedro it came at a very early age of 18 years old, the estimated age of when he died because he was 14 when he left the Philippines and when he came to Guam he lived there for 4 years, served the missions, faithful to the priests, and the Jesuit missionaries and to the Church. And so now really he is in heaven with Blessed Diego, although he beat him to sainthood, but that’s ok. Hopefully, someday Blessed Diego will be canonized a saint.

ZENIT: Following along this thought, one of the early Church fathers, Tertullian says “The blood of the martyrs is the seed of the Church.” Since Blessed Pedro was martyred in Guam, have you seen the fruits of this seed? Has this seed been planted in Guam?

Archbishop Apuron: Yes, we now have native vocations. I started a seminary called the Redemptoris Mater Seminary and I’ll be ordaining one more, number 11 this coming November 3rd, and there are 40 seminarians coming from 16 nations throughout the world. Six of them are natives and one of them is coming closer because hopefully next year he will be ordained a deacon. So, vocations are coming and I think the Church is still going strong in Guam after more than 300 years of Christianization so the Church will survive.

ZENIT: And what is the significance of this particular Saint, Blessed Pedro right now in the beginning of the Year of Faith?

Archbishop Apuron: Well, because it’s obvious that he died really for the faith. That’s why the Holy Father wanted to show to the world and to the Church that he can be an example especially for the youth. Because the youth today, many of them tend to be misled, you know by the ways of the world. And Pedro is a shining example of what an individual can become if he or she chooses to really stay close to Christ, following Christ and hopefully to the influence of others around him. For him it was the Jesuit missionaries. So, I really hope that he can continue to be an example even though he died more than 300 years ago, that he still can be a saint for the day, for these modern times, because he is an example of a young man who really gave the ultimate sacrifice. We speak about soldiers giving the ultimate sacrifice and dying for their country. He died for the Church, he died for Christ, and he died for all Christianity.

ZENIT: I’m sure you’ve been following the Synod of Bishops closely. Yesterday, many of the founders of several movements and ecclesial realities (Focolare, the Alpha Course, and the Neocatechumenal Way) also addressed the Synod. What are your thoughts right now on how the Synod has progressed and what do you hope for?

Archbishop Apuron: Well, I hope that the Synod Fathers will realize that there really is a cry for a New Evangelization, to re-evangelize perhaps the evangelized because many of them tend to be confused today. I hope that this Synod will help come forth with positive steps and positive fruits as to what we still can do as a Church, even today in this modern world. To help bring the gospel and its enduring message of faith, of hope, and of love to a people many times that are despairing, that do not have love, and perhaps are giving up hope too. So, I pray that this will help renew us all.

CAN YOU LIVE A HOLY LIFE TODAY? IT IS YOUR CHOICE…

From Failures to Fortune through Faith