HOW COULD I REFUSE?

I woke up this morning and silently started my morning prayer while in bed, unaware that my wife was looking at me. When I opened my eyes, she asked me what was the message that I am to share in this article called “Here I am Lord”, for Kapatiran. And she also asked me, what verse it is from?

I told her that there were three instances in which I was hesitant in accepting the invitation to serve in the community. 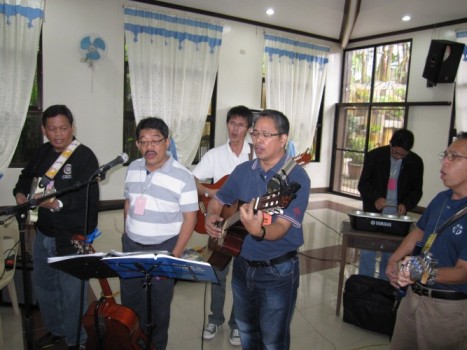 The 1st was in June 2000, when I was asked to be the Head of the Music Ministry. I was hesitant because we are just new members in the community, almost less than a year, and we are afraid because we’d have to form a new group, since most of the other members have left the ministry already for another service. Also, the last time I played the guitar prior to the invitation was almost twenty years before joining BCBP. I was afraid because we were not yet familiar with the songs and there was a forthcoming BCLP, in which Music played a big part. The only encouragement we had was that I would just play the guitar and my wife will lead in the singing, and that the community will be singing with us as well.

The second instance was in June 2005, when I was asked to be the Course Leader of the BCBP’s Family Encounter. The reason behind this was that I was asked only when it was already too close to the actual date of the event, which was October of that year, leaving me only four months to plan and handle everything, including the Fund Raising for the Sponsoring Families.

The third time was in June 2010, when I arrived in Baguio after our Governance Meeting in Manila which I had left early. I received a call from our Chapter Head informing me that during the Governance meeting, they had decided that I would be the Course Leader of the next Brotherhood Christian Life Program. I was hesitant because we had to start the BCLP immediately in the following month of July.

How could I refuse?

I just prayed in these instances and lifted them up to God, asking the Lord to increase my faith. I asked God for wisdom, strength and good health. The Lord made me realize that doing these things is similar to any other normal service in the community, from small things to big things, all you have to do is open your heart and mind. HOW COULD I REFUSE IF GOD IS ASKING ME?

Yes… All I could only remember was the Blessed Virgin Mary’s answer when an Angel appeared to her. Mary listened to the Word of God, reflected on it and strove to understand the mystery of the words announced by the Angel; and from the depth of her Faith, she said “YES” to the will of God.

“LET IT BE DONE TO ME, ACCORDING TO THY WORD.”

And from the LORD’S PRAYER…

I almost lost the opportunity of Serving God three times, much worse almost denying Him like St. Peter.

Yes, it would be easier accept God’s service if you would just think of how Jesus served us when he was on Earth, washing the feet of his disciples and being nailed on the cross. We must keep our Faith in Him, be truly committed and keep our friendship with Him through Faith and allow God to lead us.

I was able to start, write and was inspired while playing and reflecting on the song HERE I AM LORD.

God bless us all!

CHILDREN, GRANDPARENTS ARE THE HOPE OF A PEOPLE

FREEDOM: HOW FREE ARE YOU?