HOW I HAVE LIVED MY NAME

Why he took the name of Francis 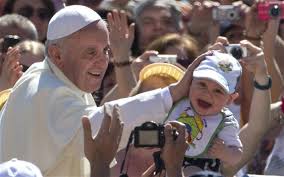 “Towards the end of the Conclave, when it became clear to all that Cardinal Bergoglio was set to become the next Pope, Brazilian Cardinal Claudio Hummes embraced the Argentinian and whispered to him, ‘Don’t forget the poor.’ Francis told the media that was what made him think of St. Francis of Assisi.

St. Francis was the ‘the man of poverty, the man of peace, the man who loves and protects creation.’ Pope Francis, like his new namesake, wanted ‘a Church that is poor and that is for the poor’. He said he took on the name because he was especially concerned for the well being of the poor across the world.”
Excerpt from WP COLLECTOR SERIES: POPE FRANCIS Two Years Of Change by Sam Wilkinson

What is the meaning of your name?

My name EDUARDO means “the protector”…..and I have lived by the name from childhood, to adulthood, and ‘lolohood’ “.

How have I lived my name?

Childhood – I was the protector of my two younger brothers from bullies BUT I was also a TLC bully to them…Tender, Loving, and Caring.
Adulthood – after college, I was tasked to administer and protect the estates of my grandparents (maternal and paternal) and my parents’ family business…. and apply TLC to the people under my responsibilities.
“Lolohood” – my grandkids (7 to 14 years old) are trained in basic boxing techniques and exposed to socialization with the children of our farm workers.

A Church for the Poor ….Mercy and Compassion

Today (January 28, 2015), we formally blessed and inaugurated the Bruno-Juliana Collado’s Compound provided by my maternal estate. I cite this as an example of living out Pope Francis’ exhortation to Mercy and Compassion. I have found this also to be a good business model.

Background: Bruno and Juliana Collado were caretakers of my grandmother’s farm property, four kilometers from the Cagayan de Oro City proper. In the ‘70s the City classified the area for light industry and residential. Farming was no longer feasible but the prime area was prone to speculators and squatters.

In the ‘90s, I made a written covenant with the nine Bruno-Juliana Collado children (second generation) to allocate a portion for their relocation in the area and advised them to plan the number of children OR not to “breed like rabbits” (Pope Francis advice in his recent visit to the country) since their children (third generation) and future grandchildren (fourth generation) would not be covered by this agreement. 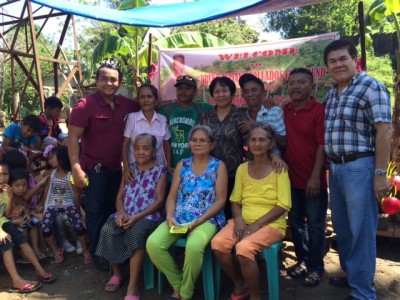 In August 2014, I met the Collado second generation with their spouses and told them that we needed to relocate their houses (35 houses all in all BUT only 9 Lots as agreed in the ‘90s) to the designated relocation area with completion to be done by December 2014 with financial assistance to construct their houses. The Bruno-Juliana Collados children stood by the Covenant /agreement just like the way they were raised by their parents – with respect, integrity, and gratitude.

Pope Francis’ BUSINESS MODEL of mercy and compassion can prevent legal litigations and unnecessary court cases: Mercy for they cannot repay you financially and Compassion for they need basic shelter.

My question for you: What does your name mean? How are you living your name?

SETTING OTHERS ON FIRE