“IN TIMES OF SUFFERING, NEVER TIRE OF ASKING WHY” 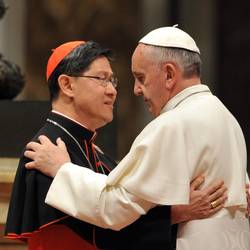 Today Francis met members of the Filipino community in Rome, joined by the Archbishop of Manila, Cardinal Luis Tagle. “In these times of suffering we wonder why these things happen and we cannot find an explanation for them.”

Vatican insider staff-Rome 11-22-13. During trying times, we wonder why these things happen and we cannot find an explanation for them,” Francis said at this afternoon’s gathering with the Filipino community in Rome, in St. Peter’s Basilica. “In these times of suffering, never tire of asking why, because you will attract the tenderness of the Father.”

The Archbishop of Manila, Cardinal Luis Tagle was also present at the gathering. He was visibly moved as he recalled the pain that typhoon Haiyan brought with it, so the Pope took the floor. Francis reflected for a few minutes on how to deal with the suffering caused by events such as the typhoon which has devastated the Philippine islands. Today’s meeting had been scheduled for the blessing of a mosaic of Philippine Saint Pedro Calungsod in the crypt under St. Peter’s Basilica. Pedro Calungsod was a 17th century martyr who was canonized by Benedict XVI on 21 October 2012.

“We cannot explain why things like this happen; there are so many things we cannot explain. When children start to grow up they don’t understand and ask their mums and dads so many questions. Psychologists call it the “why age”, they don’t wait to hear the answer but continue with other questions. Children need to feel their parent’s love and attention in that phase of insecurity they need the eyes and hearts of their parents.” In these times of suffering, never tire of asking why, because you will attract the tenderness of the Father and his attention, just as children do when they ask “why”.”

“In these times of suffering prayer is of even more help,” Francis said, assuring the Filipino people of his prayers.

THE MARKS OF A GREAT, GODLY WOMAN