INSTRUMENTUM LABORIS: A PREVIEW OF THE OCT 7-27, 2012, SYNOD ON NEW EVANGELIZATION 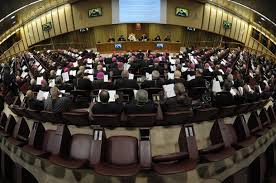 In view of the upcoming Synod on the theme of “The New Evangelization for the Transmission of the Christian Faith” Instrumentum Laboris was issued on June 19, 2012. This document outlines the issues and concerns that will be taken up by the bishops. The Vatican Information Service held a press conference during the presentation of the document. We reprint the VIS news report for your enlightenment as to what will transpire during this Synod since we believe that all four concerns have much relevance to the Philippine situation.

Vatican City, 19 June 2012 (VIS) – A press conference was held this morning in the Holy See Press Office to present the “Instrumentum laboris” of the thirteenth Ordinary General Assembly of the Synod of Bishops, which is due to be held in the Vatican from 7 to 28 October on the theme: “The New Evangelization for the Transmission of the Christian Faith”. The document was presented by Archbishop Nikola Eterovic and Bishop Fortunato Frezza, respectively secretary general and under secretary of the Synod of Bishops.

The Synod Fathers, Archbishop Eterovic said, “will reflect upon the transmission of Christian faith, one of the great challenges facing the Church which will be examined in the context of new evangelisation. … The work of the Synod will be enriched by its association with the Year of Faith”, which begins on 11 October.

The secretary general of the Synod explained that the “Instumentum laboris” includes a preface, an introduction, four chapters and a conclusion. The Introduction brings together the views of episcopal conferences, which concur “on the need for new tools and new forms of expression to make the Word of God more understandable in the life of modern man. The Synod will hopefully be an opportunity to discuss and compare points of view and practical experiences, to be shared in order to provide encouragement to pastors and particular Churches”.

The first of the four chapters, entitled “Jesus Christ the Good News of God to Humanity”, reiterates “the central nucleus of Christian faith, of which many people are unaware, and presents the Gospel of Jesus Christ as the Good News for modern man. … New evangelisation is an expression of the internal dynamism of Christianity, which wishes to make men and women of good will know the ‘depth of the riches and wisdom and knowledge’ of the mystery of God revealed in Jesus Christ; it is not a weary response to the crisis of faith and the challenges facing the Church in the modern world”.

Chapter two is entitled: “Time for a New Evangelisation”. It focuses chiefly on “identifying the challenges evangelisation currently faces”, and on “describing the new evangelisation. … The new challenges to evangelisation in the contemporary world are described in various different scenarios. The Church is called to discern those scenarios, so ‘that they might be turned into places for proclaiming the Gospel and experiencing the Church’. …The work of new evangelisation aims at a renewal of the ordinary pastoral activity of particular Churches while, at the same time, seeking to arouse a new sensibility towards people who have left the Church. This requires a measure of evangelical creativity and boldness”. The archbishop pointed out that almost all the responses received when preparing the document “highlighted the lack of vocations to the priesthood and consecrated life. This requires, among other things, strong pastoral care of vocations”, he said.

Turning then to consider Chapter three, “Transmitting the Faith”, Archbishop Eterovic noted that “the purpose of new evangelisation is the transmission of faith. The Church transmits the faith from which she herself lives, and all Christians are called to make their contribution. … The obstacles to the faith can be within the Church (faith lived passively or privately, refusal to be educated in one’s faith, separation between life and faith) or outside Christian life altogether (secularisation, nihilism consumerism, hedonism). … The Year of Faith is a pressing appeal to conversion so that, transformed by grace, each individual Christian and each community may produce abundant fruits. This may include ecumenical commitment, the search for truth, inter-religious dialogue, and the courage to denounce infidelity and scandals within the Christian community”.

The last chapter of the “Instrumentum laboris” is entitled “Revivifying Pastoral Activity” and focuses on “the transmission of faith … by again emphasising the instruments developed through Tradition – in particular the first proclamation, Christian initiation and education – while seeking to adapt them to current cultural and social circumstances. … From a theological point of view, we must better understand the sequence of the Sacraments of Christian initiation, which culminates in the Eucharist, and reflect on models to be translated into deeply meaningful pastoral practices”.

The Conclusion of the document reaffirms that “new evangelisation means giving the reason for our faith, communicating the Logos of hope to a world which seeks salvation”.
Published by VISarchive 02 – Tuesday, June 19, 2012