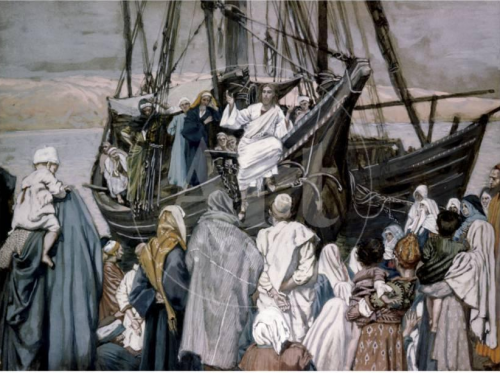 Getting into one of the boats, the one belonging to Simon, he asked him to put but a short distance from the shore. Then he sat down and taught the crowds from the boats. After he had finished speaking, he said to Simon, “Put out into deep water and lower your nets for a catch. Simon said in reply, “Master, we have worked hard all night and have caught nothing, but at your command I will lower the nets.” (Luke 5:5-8)

This had happened to a relative before as they drove their car towards Aurora Boulevard in Cubao. As soon as they stopped for a red light they heard a door open and a complete stranger came and sat in the back seat saying a word and looking blankly straight ahead. Naturally, the three real occupants in the car engaged in a scuffle with this intruder until they were able to eject him out to the street. They drove away relieved and sweaty, never figuring out why that happened or who that person was.

In the Gospel narrative above in Luke, it was a totally different event. As Simon and his men cleaned their nets after a frustrating night of fishing, a huge crowd had started to gather on the quay. It was so huge that a pin could hardly drop between two persons, perhaps much like our Black Nazarene ‘Traslacion’ in Quiapo. The crowd was just as desperate to catch a glimpse or touch or speak or even gaze or listen to one whom they followed as a prophet and healer. All the fishermen around including

Simon was just as curious about this prophet of whom they were hearing about. The size of the crowd brought a sense of wonderment to Simon. Then suddenly through the crowd the prophet steps through and gets into Simon’s boat. Grace had invaded Simon’s life. It would no longer be the same again. He was told to put Simon’s boat a little off the shore so his voice would resonate better over the waters.

Then He taught the crowds. And perhaps Simon was right there in the boat with Jesus. He heard and saw clearly for himself such wisdom and authority he had never seen before. Even though not a single thing was said about what was preached, what occurred after that specially after they had put out into the deep in broad daylight(against a fisherman’s instincts and practice)was so life-changing and powerful that Simon fell on his knees confessing his sinfulness. The huge catch of fish astonished all of them in the boat and their partners. It SEIZED ALL OF THEM. The huge crowd, the preaching, the command to put out into the deep against their knowledge and instinct, the huge catch that almost sank both boats, the stunning presence of Jesus throughout all these and the unmistakable feeling that they were in the presence of the divine jolted them in fear. Were they going to die?

Then Jesus calmly speaks. “Do not be afraid; from now on you will be catching men.” This sentence is not merely a suggestion like, “Perhaps you would like to join me in catching men. If you are not too busy.” They knew who they were. Fishermen, unschooled and perhaps rough characters of the docks and fish markets. Drunkards, gluttons, even womanizers.

But God KNEW who they were. They were HIS precious creations, capable of love and sacrifice. And when God speaks, He creates the universe, the stars, the sun, the mountains and the seas. So when Jesus spoke,”…from now on you will be catching men.” some power had been unleashed. It was a call to work for the Kingdom of God!

Who would understand”…catching men..”? It could only have been God who placed that in their hearts get them, amazing them, astonishing them and bringing Simon to his knees. So life-changing that “they left everything and followed him.”

For hundreds of times that I have read that I merely assumed that well THAT IS SIMON, he was supposed to do things like that unquestionably. But if Jesus were to go into that Black Nazarene Traslacion crowd and point to a barefoot market fish vendor and say he is your next Pope! Would I assume the same? Impossible and unacceptable, the human side of mine would say.

It would not happen except for two things, THE DIVINE ENCOUNTER AND THE WORD OF GOD.

Isaiah the prophet (Is 6:1-2,3-8) clearly says, “In the year King Uzziah died, I saw the Lord seated on a high and lofty throne with the train of his garment filling the temple…..Then I heard the Lord saying, “Whom shall I send? Who will go for us?” THE ENCOUNTER AND THE WORD.

Paul, in 1 Corinthians 15 proclaims, ”Last of all, as to one born abnormally, he appeared to me…But by the grace of God I am what I am, and his grace to me has not been ineffective. Indeed I have toiled harder than all of them; not I, however, but the grace of God that is within me.” The ENCOUNTER AND THE WORD. Even though in this paragraph Paul does not relate how Jesus spoke to him at that encounter we all know it was a direct encounter and dialogue with Jesus was on that road to Damascus that knocked Paul off his horse and blinded him.

Fr. Ted Torralba, in his Sunday homily at Sacred Heart Rockwell, mentioned that THE BOAT, represents the sum total of our life which upon Jesus’ boarding begins the INVASION BY GRACE. We see the profound effect that this DIVINE INVASION had done on the lives of Isaiah, Saul and lastly Simon in that beautiful Sunday liturgy (February 10, 2019). Once the invasion has been met by confession and humility, recognizing who we are before the Lord, then the indwelling of the Spirit enables the ordinary, qualifies the chosen. Indeed many are called but few are chosen. And even beyond that many who have the ENCOUNTER, few are able to live fully with the empowerment. Also because our response to the encounter requires our free will.

We, in the BCBP have our individual encounters as seen by the thousands of breakfast testimonies in the past 38 years. I have witnessed so many transformations in our community that it seems impossible to my mind that some do not get that wonderful grace of meeting the Lord. But sadly there have been many that we call have “back slid”. Recognizing that the Holy Spirit is aboard their boat is the farthest from their mind. What may be some remedies?

Why belabor this point you say? Because evangelizers MUST be disciples! Matthew 28:19 says “Go and make disciples of ALL nations.” And this call is not only for the religious orders, clergy, but for the laity as well. We are all sent! By whom? THE LORD!!

I believe there lies the problem. Many so-called believers of the Catholic faith and BCBP members included, have a weak perception of what a Lord is, more specifically what the Lordship of Jesus means.

Now hold on you say. Are we going to be here for the next 5 hours proving this point? Well, if you ask me, the best way to start appreciating who the Lord is, is to the read the whole Old Testament, which prefigures who JESUS THE LORD is. I leave that as a challenge for now.

Lordship to people of the Old word is clear as day. I like to picture scenes from the “Lord of the Rings” where their ragged army awaits the appearance of their enemy. Then on the mountaintops horse and rider would appear one after the other in the hundreds followed by legions of infantry, bowmen and more cavalry. And then finally in the center, their king, their Lord. After the bloody battle whoever is victorious becomes the Lord of all. The losers are vanquished and crushed. If you live and are taken as a slave then you know who your lord is.

But, ordinarily, where can we appreciate or taste, deepen the Lordship of Jesus in our lives? In the Holy Mass, the source and summit of all Christian faith and worship, where 2 great encounters are to be celebrated. The first ENCOUNTER is in the liturgy of the Word. God is present in His Word and is the first part of the Eucharist that we partake in the mass. After the proclamation of the readings and the Gospel, the homily is given to further the experience of encounter with the Lord. Then we sit silently to personalize what this day’s encounter with the Word means to us.

Now this where many of us struggle. Perhaps in our preparation for the mass we are chatting with family, texting or checking messages, when we really should be focusing on what is ahead, a supernatural encounter with our Lord and King!

That is precisely where some difficulty lies. If you were five minutes in the anteroom of Buckingham Palace previous to your first meeting with the Queen of England would you be fiddling with your mobile phone, fixing your tie or shining you shoes? It would be too late. You would be quiet trying to focus on what you want to say and how your will carry yourself in that meeting.

After spending time in silence after the homily, we stand up and pledge allegiance to our Lord with the Creed, the summary of our faith. I believe in God!

After that is a shift to the Liturgy of the Eucharist. Another preparation for us, if we are not chatting or checking our phone.

In faith we are truly transported to the throne room of God, as Isaiah was. Every mass is celebrated in heaven in the company of the angels and saints and the church triumphant. The mass then focuses on the Holy Sacrifice of Jesus, once for all, offered to the Father, for all of us. The transubstantiation is an actual supernatural event to which we are a witness to which we loudly express our faith and assent in the Great Amen.

I read somewhere that for the early Christians who were under persecution in Rome were actually shouting at the top of their voices, the Great Amen, as they celebrated mass in the catacombs. They were preparing themselves for martyrdom every day. How loud would you say or pray AMEN if you know you were going to be fed to the lions in a matter of hours?

Finally, the elevation, where the priest raises the host and proclaims, “This is Jesus, the Lamb of God!” Suddenly we are humbled. We see his great army on the horizon, legions of angels, saints and billions of the redeemed surrounding his great throne. We surrender. We recognize Him as our Lord. “Lord, I am not worthy but if you say the word then my soul shall be healed!”

Then we receive Him, the Body of Christ! Then the Holy Spirit dwells in us. Power is transferred. The mass ends. Are we aware of the encounter, the Word, the power? Do we use it? Do we live our faith? Do we witness, serve him? Or we just pick up our mobile from our pocket and go on with our day?