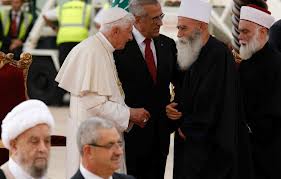 Pope Gives Analysis of Foundations of Peace:
Speech Called Characteristic of Ratzinger’s Method of Getting to Depths of Issues

BEIRUT, Lebanon, SEPT. 15, 2012 (Zenit.org).- The Vatican’s spokesman described Benedict XVI’s speech this morning to political, religious and cultural leaders of Lebanon as typical of the method of Ratzinger.

Jesuit Father Federico Lombardi gave this evaluation because the address — on the theme of peace — goes to the very depths of what is needed to achieve peace, offering insights into the relationship between peace and anthropology, and the tactics of the devil in seeking allies among man.

Father Lombardi said the president of Lebanon’s Parliament told him afterward that all the people and the politicians of the Middle East should hear, read and meditate on this speech of the Pope.

Benedict XVI’s proposition was that effectiveness in the commitment to peace depends on an understanding of human life.

If we want peace, let us defend life!, he exclaimed. This approach leads us to reject not only war and terrorism, but every assault on innocent human life, on men and women as creatures willed by God.

The Pope reflected that God chose the regions of the Middle East, to be an example, to bear witness before the world that every man and woman has the possibility of concretely realizing his or her longing for peace and reconciliation! This aspiration is part of God’s eternal plan and he has impressed it deep within the human heart. 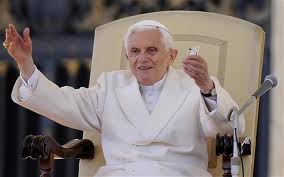 The Holy Father said that a constant returning to the wellsprings of our humanity is necessary to find the energy to work for peace. Our human dignity is inseparable from the sacredness of life as the gift of the Creator. In God’s plan, each person is unique and irreplaceable. A person comes into this world in a family, which is the first locus of humanization, and above all the first school of peace. To build peace, we need to look to the family, supporting it and facilitating its task, and in this way promoting an overall culture of life.

He added that wherever the truth of human nature is ignored, it becomes impossible to respect that grammar which is the natural law inscribed in the human heart.

The Pontiff spoke of various assaults on human life, including unemployment, poverty, corruption, a variety of addictions, exploitation, different forms of trafficking, and terrorism, adding that we run the risk of being enslaved by an economic and financial mindset which would subordinate ‘being’ to ‘having’!

The destruction of a single human life is a loss for humanity as a whole, he said. Mankind is one great family for which all of us are responsible. By questioning, directly or indirectly, or even before the law, the inalienable value of each person and the natural foundation of the family, some ideologies undermine the foundations of society.

Benedict XVI proposed that what should lead us to a new kind of fraternity amid cultural, social and religious differences is a shared sense of the greatness of each person and the gift which others are to themselves, to those around them and to all humanity.

The Pope then spoke about the fundamental importance of education in the path to peace, describing the goal of education as to guide and support the development of the freedom to make right decisions, which may run counter to widespread opinions, the fashions of the moment, or forms of political and religious ideology.

The Holy Father also warned of a need to be very conscious that evil is not some nameless, impersonal and deterministic force at work in the world. Evil, the devil, works in and through human freedom, through the use of our freedom. It seeks an ally in man. Evil needs man in order to act. Having broken the first commandment, love of God, it then goes on to distort the second, love of neighbour. Love of neighbour disappears, yielding to falsehood, envy, hatred and death.

Still, he reminded, it is possible for us to overcome evil with good. Without such a conversion of heart, all our coveted human ‘liberations’ prove disappointing, for they are curtailed by our human narrowness, harshness, intolerance, favouritism and desire for revenge.

The Pontiff suggested that such a conversion can even be exhilarating, since it creates possibilities by appealing to the countless resources present in the hearts of all those men and women who desire to live in peace and are prepared to work for peace.

True, it is quite demanding, he added. It involves rejecting revenge, acknowledging one’s faults, accepting apologies without demanding them, and, not least, forgiveness.

From family to society

The Pope asserted that peace and Christian-Muslim coexistence is quite possible.

The particular character of the Middle East consists in the centuries-old mix of diverse elements, he continued. Admittedly, they have fought one another, sadly that is also true. A pluralistic society can only exist on the basis of mutual respect, the desire to know the other, and continuous dialogue. Such dialogue is only possible when the parties are conscious of the existence of values which are common to all great cultures because they are rooted in the nature of the human person. This substratum of values expresses man’s true humanity. These values are inseparable from the rights of each and every human being.