(As we conclude our quick study of Dr Peck’s views on marriage and family, we move into the areas of shared responsibility and reconciliation in family relationships. These are two essential ingredients in family life, which can pave the way towards the creation of a home where God truly reigns. As always, pronouns are interchangeably used.)

Judging and Blaming Among Family Members
“Let him who has committed no sin throw the first stone at her.” Jn 8:7

In family life, it sometimes feels that Murphy’s Law is at work: If anything can go wrong, it will. Realistically speaking, difficulties are indeed part of the territory. It would be impossible to find a constantly trouble-free family. It is one thing, however, to consider the negative (of course there are positives too, but we’re not focusing on those right now) CONTENT of family life – things going wrong, clashes of individual wills, disappointments and unmet expectations, hurts inflicted between family members – and still another to look into the PROCESS considerations. Very simply, process considerations refer to how we manage things, regardless of whether they are positive or negative to begin with. 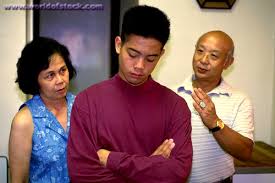 Therefore there’s a world of difference between a parent who forgives the child who is caught lying, and one who punishes the same with a slap in the face. Likewise, we can establish the contrast between a parent who negotiates a promise of “never again” from a son who comes home drunk, against another, who threatens to “skin you alive” if the transgression is repeated.

Indeed, as parents who necessarily come face to face with the offences of our children, the initial impulses we experience are to ascribe blame to the misbehaving person. Once fault is pinpointed, we go about giving consequences as we see fit. It is interesting, however, that we often ascribe blame to someone else.

Is the teen who experiments with smoking really the culprit if for instance his father is a chain smoker, or if ashtrays and cigarettes are liberally strewn around the home? Can an overweight daughter be held fully responsible for her condition if, in the home, the ref is teeming with empty calories, or Mama is a couch potato, or if their favorite family outing takes them to a fastfood joint? If we really want to do the right thing, if we really want to exercise just and wise parenting, we need to set our sights far and deep, beyond the apparent misbehavior, onto factors which might have brought it on.

In order to arrest the tendency to project responsibility to other family members through blaming, even attacking, each individual in the family (and by this, we fully expect the parents to lead the way by example!) must start the search for understanding and resolution of the difficulty by looking at one’s own behavior.

In addition to being unfair, misdirected and self-righteous, another problem with simply projecting blame onto other persons is that responsibility is ascribed to outside of the self. One who projects blame places the responsibility onto another person whom he has actually little power to affect. A parent can lecture her child against smoking until both of them are blue, and she can mete out punishment after punishment, but if the young one REALLY decides to pick up the vice, he will. Indeed, it feels very powerless to force someone else to grow. A spouse or parent who attempts to change a partner or child will often experience frustration and attract resistance. Healthful growth and acceptance of responsibility are ultimately internally controlled.

It might be more helpful, process-wise, for a parent or spouse confronting such a dilemma to examine his own manners, habits and attitudes – especially those he is not exactly conscious of. How could these have possibly contributed to the undesirable behavior? What can he personally do in order to be a better influence and inspiration to the offending family member? A wife who would like her husband to be more-this or less-that can cultivate such a change only by working on her own behaviors and thoughts toward her husband. If she simply tells him – or tells him off! – she will likely produce the opposite outcomes.

Responsibility for one’s self rests upon one’s self. And because these are such intimate relationships where so much is shared, the health of a marriage or a family rests fully upon each member of the unit.

Linked to the concept of shared responsibility is the difference between linear thinking, where A causes B, and systemic thinking, where circular patterns of responsibility and reciprocity are considered. In a marital conflict, it is often not enough to look for the singular cause of a problem. Many times there are two traceable “beginnings” somewhere in the life of each spouse, even before they met each other! To truly address the conflict, there should be less concern over the origin of the difficulty and more towards what each of them is doing to contribute to and perpetuate it. This is also true in the parent-child relationship. Moreso, because if each parent were to trace her child’s beginnings, she is most certainly part of it!

When Jesus said “Let him who has committed no sin throw the first stone at her”, he was describing Christian relationships in a systemic rather than linear way. The matter was not simply the woman’s adultery. The society she was in, as well as all the members of it, were contributors to the situation that led her to sin. We are, indeed, our brothers’ keepers.

Reconciliation
“Your sins are forgiven you.” Luke 5:20 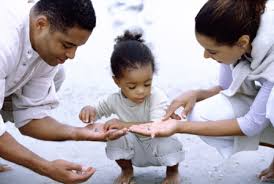 A common theme in all the stories about Jesus is the emphasis placed on acceptance. Jesus, despite hating sin, always loved the sinners, in all their corruption and wretchedness. In the most constructive form of self-love a person is not afraid to look at both the positive and the negative aspects of himself. Consequently, spouses and children will not have to be dumping grounds of negative projections. The Christian parent ought to sincerely attempt to love all aspects of herself and demonstrate “good fruits.”

How does a person accept all these ugly parts of the self when society teaches us to hide fears and hurts and negative parts of ourselves? When there is such pressure to be admirably flawless?

First, Jesus preached the forgiveness of sins. If the concept of forgiveness is truly integrated and applied, a person will not have to hide from the parts of himself which are difficult to accept. Second, God’s acceptance of humanity, symbolized by the incarnation of the Son, gives each individual the power to accept himself in all its humanity. God’s forgiveness and acceptance gives us the courage and opportunity to look at our successes and failures, strengths and weaknesses, and incorporate them into the fabric of our lives. This is an excellent example of how process can make the best of any content.

A family made up of persons who accept Christ’s forgiveness will be characterized by the struggle to understand one another and look at their own complicity for the failures or difficulties in their relationships. A Christian marriage is made up of two individuals who are not afraid to ask, “What am I contributing to the problem?” and “How am I enhancing my growth and that of my spouse?” This extends toward the entire family. The goal for the Christian, in enhancing the sanctity of marriage and the family, is to use Christ’s gift of forgiveness of sins and acceptance of humanity in the journey towards self-reflection, self-knowledge, self-acceptance and self-integration through the power of the Holy Spirit.

While no one attains it fully, the closer we come to reconciling all parts of ourselves, the healthier we can become, the more able we are to love another unconditionally.

PLS PRAY FOR OUR SON