LUMEN FIDEI: THE LIGHT OF FAITH MUST TRANSFORM LIVES

VATICAN CITY, July 5 (CNA/EWTN News) .- In his first encyclical, “Lumen Fidei,” or “The Light of Faith,” Pope Francis highlighted the need to let Christ’s love transform and renew our lives, so that we may transmit our faith to the world. 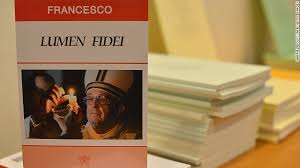 “Faith is born of an encounter with the living God who calls us and reveals his love, a love which precedes us and upon which we can lean for security and for building our lives,” the Pope said in the document, released July 5.

“Transformed by this love, we gain fresh vision, new eyes to see; we realize that it contains a great promise of fulfillment, and that a vision of the future opens up before us.”

Noting the modern tendency to see faith as an outdated illusion, contradicting the truth found through reason, Pope Francis stressed the urgency of returning to an understanding of faith as a light, “for once the flame of faith dies out, all other lights begin to dim.”

Faith does not divorce us from reality, he explained, but rather, it “enables us to grasp reality’s deepest meaning and to see how much God loves this world and is constantly guiding it towards himself.”

Pointing to the example of Abraham, who heard God calling his name, the Holy Father explained that faith is deeply personal and “is linked to hearing” the voice of God, who offers “both a call and a promise.”

Modern culture “has lost its sense of God’s tangible presence and activity in our world,” instead thinking of God as a removed and distant being, he lamented. But in reality, faith requires us to embrace Christ in a personal and complete way.

“Faith does not merely gaze at Jesus, but sees things as Jesus himself sees them, with his own eyes: it is a participation in his way of seeing.” 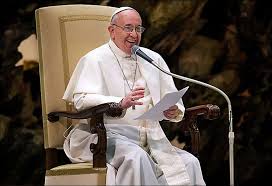 In this way, faith will only lead us to salvation if we are “radically open to a love that precedes us, a love that transforms us from within, acting in us and through us,” he said, explaining that we must allow Jesus into our lives without reservation, realizing that his life, death and resurrection show him to be “the trustworthy witness, deserving of faith,” utterly reliable in his love.

The connection between faith and truth was a key concept in the encyclical.

“Faith without truth does not save, it does not provide a sure footing,” the Pope said. “It remains a beautiful story, the projection of our deep yearning for happiness, something capable of satisfying us to the extent that we are willing to deceive ourselves.”

This reality is important to remember in a world that equates truth with science and technology, falling into a relativism that disregards the fullness of truth, which requires faith.

At the same time, this truth must be connected to love, Pope Francis continued. “Without love, truth becomes cold, impersonal and oppressive for people’s day-to-day lives.”

“Love and truth are inseparable,” he said, explaining that “(f)aith transforms the whole person precisely to the extent that he or she becomes open to love.”

In the contemporary world, love is seen as an emotion unrelated to truth, he observed. But in reality, “love is an experience of truth,” which allows us “to see reality in a new way, in union with the beloved.”

“Only to the extent that love is grounded in truth can it endure over time, can it transcend the passing moment and be sufficiently solid to sustain a shared journey. If love is not tied to truth, it falls prey to fickle emotions and cannot stand the test of time.”

“The light of love proper to faith can illumine the questions of our own time about truth,” Pope Francis said, noting that truth is viewed subjectively by the modern world, and objective truth is seen as a threat.

Because it is grounded in truth, faith can also benefit science, the Pope said, because it “encourages the scientist to remain constantly open to reality in all its inexhaustible richness,” recognizing that “nature is always greater.”

The importance of the Church was also a focus of the document. While the Holy Father stated that any person “who sets off on the path of doing good to others is already drawing near to God,” he also noted that it is “impossible to believe on our own.”

“Faith is not simply an individual decision which takes place in the depths of the believer’s heart, nor a completely private relationship,” he said. Instead, faith by its very nature “is open to the ‘We’ of the Church; it always takes place within her communion.”

It is the gift of apostolic succession that protects and ensures the unity of the faith, transmitted from generation to generation, he continued, stressing the importance of prayer, the profession of faith, the Ten Commandments and especially the sacraments in the Church’s transmission of the faith.

He also noted the key role of family as a critical setting for the growth of faith, specifically referencing “the stable union of man and woman in marriage,” which creates the good of new life.

Faith is also a common good for society, the Holy Father observed. “Its light does not simply brighten the interior of the Church, nor does it serve solely to build an eternal city in the hereafter; it helps us build our societies in such a way that they can journey towards a future of hope.”

Because it is linked to trustworthy love, the light of faith can serve justice and peace, he explained. It unites men and women, allows them to respect nature, in which they see the hand of God, and gives light and hope to their suffering.

“To those who suffer, God does not provide arguments which explain everything,” the Pontiff remarked, “rather, his response is that of an accompanying presence,” seen in Christ who chose to walk the path of suffering with us and illuminate it with his light.

Pope Francis also emphasized that our faith must not remain interior, but should naturally and necessarily result in evangelization.

“Faith is not a private matter, a completely individualistic notion or a personal opinion: it comes from hearing, and it is meant to find expression in words and to be proclaimed,” he stated.

If we truly allow faith to touch our lives, he explained, we will be continually renewed and transformed in a way that will reach out to those around us.

“Those who have opened their hearts to God’s love, heard his voice and received his light, cannot keep this gift to themselves.”

AN EMPLOYER’s CRAMMING GUIDE TO COMPLY WITH BATAS KASAMBAHAY

GOD AND I CHANGED THE FACE OF MY BUSINESS

Nice Encyclical. Indeed, “I believe” because “We believe.”