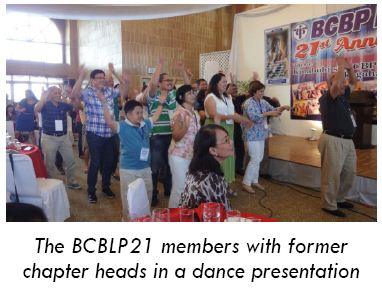 More than one hundred fifty members and guests gathered at Crown Regency Suites, Lapulapu City on October 26, 2014 to celebrate another milestone in the history of BCBP Mactan its 21st Anniversary.

True to its theme: “Kinabuhi sa BCBP, Kagahapon ug Karon”, the grand breakfast hosted by past CH Martin Pusta had Casi and Emma Nadela, Mactan’s 1st CH, as sharers . Four first tim-ers were blessed to have been part of the big celebration.
From the breakfast, the attendees were treated to a series of surprise numbers by emcees Rene and Susan Recamara. 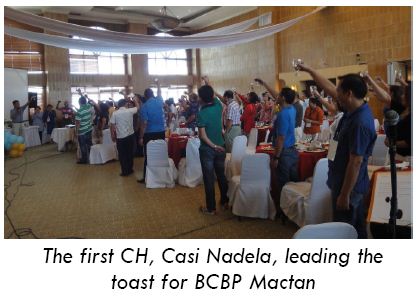 First of which is the dance number by the past chapter heads joined in by the participants of the on-going BCLP21. The true mingling of yesterday and today did a very good imitation of the dance video presented before them to the great delight of the audience.

Another surprise was the awards given to Best in Attendance breakfasters and to the members with the most number of sponsored first timers attending the BCLP.

As brunch was serve, beautiful melodies of the present and the past were belted by the members of the music ministry and other surprise singing talents.

Adding thrill to excitement was the raffle draw of door prizes toward the end of the program. Happy are those who stayed till the end for they did have their reward. 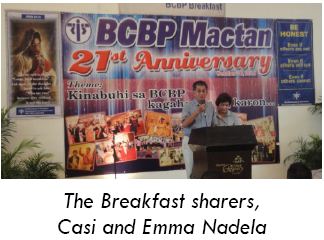 Indeed the 21st Anniver-sary celebration is a testimony that celebrations for the Lord turns out wholesome and fun even with less fanfare and preparation.