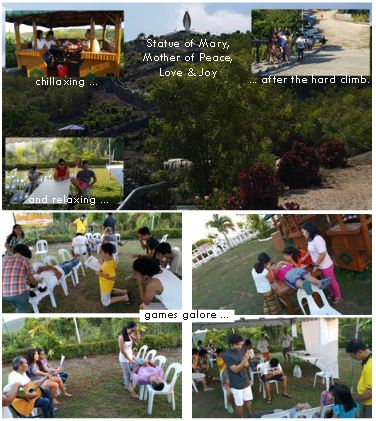 Taking a break from the normal grind of everyday living, 1 9 families or more than 60 individuals of BCBP Mactan took to the mountains for a family weekend camping adventure, relaxation & fun. The somewhat low turnout was because a good number of members were left behind to serve in the community’s ongoing Saturday CLP sessions. Not just your ordinary campsite, the venue, Q Park, spanning 3 mountain barangays of Compostela,Cebu, offers diverse opportunities for holding religious, cultural & socio-civic activities. Aside from the camping grounds, it has facilities for holding the Way of the Cross leading up to a dedicated hill as Jesus’ crucifixion site aptly named Calvary Hill, a retreat house & cottages, another hill named the Marian Hill where a 40-feet statue of Mary Mother of Love, Peace & Joy stands.

At the foot of the Marian Hill is a small but beautiful chapel & a replica of the House of the Virgin Mary in Ephesus, Turkey, believed to be where Mama Mary lived until her assumption into heaven. And yet another hill is named Heroes Hill housing an exhibit of the legacies of our Filipino heroes, great warriors and leaders, as well as the OFWs, our unsung heroes. And many more like the nativity caves, lifesize statues of popular saints, & a labyrinth. The activity started in the mid-afternoon of Saturday, May 23, with a praise & worship led by Programs & Services Director Gel Sanchez. Then followed the welcome remarks by Chapter Head Orly Manuel. After which action & fun started when the games began where the participants were grouped in teams. The games were like the “charades” game where one member or the entire team act out things or scenes & the rest of the team quickly guess what is depicted or the judges pick out the team who best
describes or depicts the thing or scene. The teams of Jhun Pardico & Baby Dauz were both declared overall tie winners. After the games, the men & the children started to setup the camping tents while the ladies prepared for dinner. Then after some minutes after dinner & due to time constraints, the scheduled film showing was defered in lieu of the earlier starting of the Holy Mass. 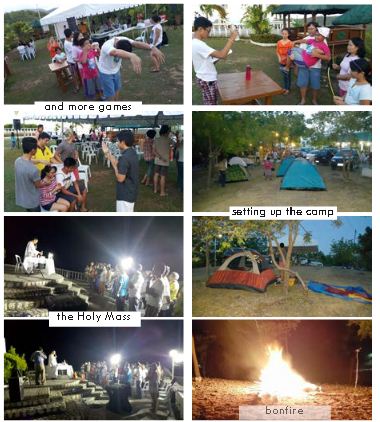 The mass was held at the foot of Mama Mary’s statue officiated by Msgr. Renato C. Beltran from St James the Apostle Parish, Compostela. After the mass everyone proceeded back to the campsite for a few hours of fellowship with barbecue & hotdog by the campfire before calling it a night. Early the next day, Sunday, after break fast, the main activities were again preceeded with a praise & worship. Then while the others continued with their breakfast & personal hygiene, some gathered together for the morning dance exercises. Then followed a film showing of a wholesome family & Christian-oriented movie entitled “Courageous”. After the film showing, the kids were rounded up for some processing based on the movie. Everybody then gathered together for the early “boodle fight” style lunch. Everyone had fun trying to get their fill with bare hands. After lunch was the reading of “anonymous love letters” from the children addressed to their respective parents. The letter-reading made some parents emotional & the hugging & kissing of the respective families was indeed a fitting finale to the adventuresome, fun-filled, family-bonding event. Though tired, everyone was refreshed & recharged.