MAKATI GOLFERS’ BREAKFAST AND ME

Makati Golfers’ Breakfast and Me
By Danny Silbor, BCBP Makati

I am writing about the Makati Golfer as a Breakfast goer. And not about the popular Menu item in such places as the Baguio Country Club. 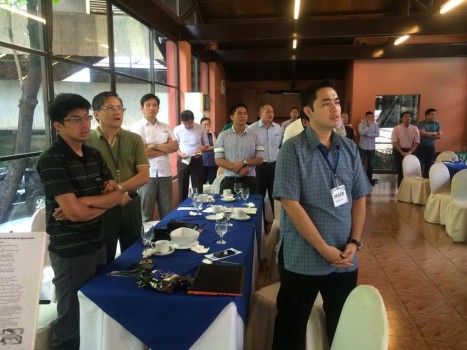 I have been playing the guitar, and acting as the solo music ministry for the Makati breakfast since the late 1990’s. And as I end my second (extended) year as Makati Breakfast head, the urge to share about my breakfast musings seems overpowering. So whilst I am yet overpowered, why not let a “hybrid” golf-breakfast column come forth.
The Makati Wednesday Breakfast is where everything began for BCBP (in 1981). “Why are we still doing this weekly breakfast after all these years?” The Makati Chapter has done the Christian Life Program, CLP, successfully for 40 times. And many active members have joined the Brotherhood directly without the benefit of passing thru the breakfast. Just like this writer.

So why am I still active in the weekly breakfast? The answer, of course, lies in the frequency of events or rather, the difference between them. CLP’s happen only once or twice a year. We need a weekly show window of the BCBP to attract very busy businessmen amidst the fast moving world of the Makati business scene.

Due to a constantly varying breakfast attendance, I myself began asking such a question about its practice to this very day. I have had so much questions as to how it was being conducted. So many, in fact, that the chapter leadership decided to offer the breakfast headship to this writer. As if to tell me, you know the problems then please help find solutions. (Me and my big mouth!). I am now in my second, overstaying year as Makati breakfast head. Perhaps the Holy Spirit (I believe) never allowed me to decline at that time. For one, I had this voice telling me that I knew what to do, after all I have played the guitar in the breakfast for a long time and witnessed how the breakfast went on for many seasons. For another reason, I did want to decline but Mission Director Ricky Siton flew to the states the next day escaping my protest.

Captains of Industry? Perhaps that kind of target crowd made more sense in the old days, when we were focused in Makati. Most of the Makati working crowd now need to be at their desks or in a meeting somewhere, by 9 am. Things are different now than they were in 1980.

The solution to attract the Makati office crowd was perhaps floated by Louie Morales during an after-Fun Run breakfast within the Ayala Triangle. The breakfast was served at the old Makati Stock exchange canteen. Tatang Louie envisioned a short-version breakfast say commencing 7 am so that the people can get back to the trading floor or offices before 7:45. Targeting all Makati Stock employees, with all of this happening in the symbolic heart of the Makati business district which is the Makati Stock exchange located on its main street, Ayala Ave.

The Makati Wednesday breakfast has to remain a beacon of sorts, like a flagship for the BCBP nationwide breakfasts. This principle is even made more significant by the fact that after 35 years, the weekly event is still being held at the birthplace of the Brotherhood, the Makati Sports Club. This thought has also elicited tempting visions of bringing back the breakfast invitation for the “Captains of Industry.” Perhaps bring back the event to the Grand Ballroom, perhaps serving meals at Php 350.00 a plate for top level business leaders. Then Makati makes sure the BCBP’s own Captains of Industry will be available to attend and act as sharers. This idea has yet to take on a real dimension.
The Makati Sports Club remains a silent witness to the history of BCBP specially to Makati Chapter. To this day, a group of 8-12 long time, consistent Makati breakfasters still occupy a chosen table. These senior members call themselves the “Calamansi group”. Pioneered by Boy Lindo, now an octogenarian, these brothers could not bring themselves to leave the Club after the Wednesday breakfast but had instead hung around by the poolside to sip on Calamansi juice for about an hour after breakfast. They have been doing this since we brought the breakfast back to Makati Sports Club in the 1990’s.

And this is where recognition of another group comes in. Next to the Calamansi group, there is another Makati informal group that has quietly shown consistent attendance, even years before I became breakfast head. It is time to recognize my brother golfers, all members of the still informal Christians in Golf Association (CIGA). Perhaps the success in observing the early waking time for Wednesday is related to another habit of having to wake up early – waking up in time for an early tee off on the fairways. The current informal president is Bro Rico Robles, or at least until one of us scores another hole in one. It’s been a while since anybody did.

Conceived in 2008, CIGA has now proved that Golf can be strategically used as an evangelization tool. We have recruited or enlivened several members thru the sport. Not that it matters, but in our 6th year, CIGA remains to be an informal but effective “organization.”

The Breakfast is said to be unique to the Brotherhood. Makati must maintain some leadership. Whilst the chapter shares attendance struggles with other Chapters, traditions must be observed even though things are much different now. Traffic is certainly different and much more horrifying. The fact that the Makati breakfast remains the only breakfast on Wednesdays is not helping. Tradition again.

Makati is a cosmopolitan city where most of the country’s business is run. Makati runs Monday to Friday, and not on weekends. It is fitting that the breakfast is on a Wednesday, very much a working day. Perhaps it is a brief respite to refresh one’s self at the height of the weekly business cycle stress. And it is held on the morning of the “hump day” or how young people nowadays refer to Wednesday.

It is also appreciated how the Makati Golfers are able to schedule their weekly golf games on a Thursday. God’s plan? Yes it is. Ecclesiastes 3: Everything happens in God’s time. Including your weekly schedule. Including your golfers’ breakfast.