Pope: More martyrs exist today than in the early Church 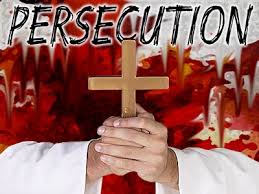 VATICAN CITY, March 4 (CNA/EWTN News) .- In his daily homily Pope Francis called persecution a “reality” of Christian life, challenging faithful to take up the cross and noting that we are never given more than we can handle.

“But (people say) ‘today we are better educated and these things no longer exist.’ Yes they do!” the Pope said March 4.

“And I tell you that today there are more martyrs than during the early times of the Church.”

Centering his reflections on the day’s Gospel taken from Mark – in which Peter asks Christ what the disciples will receive for following him – the Pope pointed out to those present in the Vatican’s Saint Martha guesthouse the response of Jesus, who explained that their reward would be great, but not without persecution.

“It’s as if Jesus said, ‘Yes, you have left everything and you will receive here on earth many things: but with persecutions!’ Like a salad with the oil of persecution: always!”

This, he said, “is what the Christian gains and this is the road for the person who wants to follow Jesus, because it’s the road that He himself trod: He was persecuted!”

Drawing attention to Paul’s words in his letter to the Philippians where he says that “Jesus emptied himself and being in every way like a human being, he was humbler yet, even to accepting death, death on a cross,” the pontiff observed that the path of a Christian is “the road of humbling yourself.”

Noting how “this is the reality of Christian life,” Pope Francis continued, warning those in attendance that the Cross is always present when we follow Christ, and that although we will receive brothers, sisters, mothers, fathers and a community in the Church, we will also have persecutions.

Because of this “we have persecutions: with words, with insults, the things that they said about Christians in the early centuries, the condemnations, imprisonment,” he went on to say, emphasizing that we often “easily forget” that persecution happens today.

“We think of the many Christians, 60 years ago, in the labor camps, in the camps of the Nazis, of the communists: So many of them! For being Christians!” the pontiff observed, adding that although some might believe that “these things no longer exist,” they “do,” and to a greater extent than in the early Church.

“But it is a joyful road because our Lord never tests us beyond what we can bear,” he expressed, observing how “Christian life is not a commercial advantage, it’s not making a career: It’s simply following Jesus!”

Challenging those present, the pontiff encouraged attendees to think about whether or not “we have within us the desire to be courageous in bearing witness to Jesus.”

Drawing his reflections to a close, Pope Francis invited those present to think about all the people who are not able to attend Mass because it is forbidden, and encouraged them to ask themselves if they are prepared to carry the Cross of Christ and suffer persecutions, just as Jesus did.