STEUBENVILLE, OHIO, May 28 (CNA) .- Noted Catholic convert and author Dr. Scott Hahn published a new book May 27 exploring the biblical roots and modern-day interventions of the angels and saints. 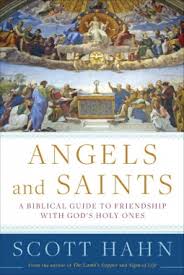 Hahn told CNA in a recent interview that his improved relationships with several saints inspired him to write the new book, titled “Angels and Saints: A Biblical Guide to Friendship with God’s Holy Ones” (Image).

“When I became a Catholic back in 1986…the Catholic Church as the family of God struck me as absolutely true and biblical,” explained Dr. Hahn, a professor of Biblical theology at Franciscan University of Steubenville in Ohio. “Twenty-eight years later, I realize that it’s true because it’s real and biblical – but even more, it’s beautiful. It’s powerful.”

Dr. Hahn is the bestselling author of several other books, including “The Lamb’s Supper” and “Rome Sweet Rome.” He is also the founder and director of the Ohio-based Saint Paul Center for Biblical Theology.

His latest 208-page book is divided into two parts. The first explores the roots of sainthood, angels and veneration of the saints. The second half offers reflections on saints who have influenced his own life. Hahn opens “Angels and Saints” with a powerful story of the intercession of several saints during a recent pilgrimage to Assisi. During the pilgrimage, his son, Joseph, became very ill. He was taken to a local hospital, where doctors said they would have to operate if his condition did not improve. That night, his son’s health took a turn for the worse.

“I knew (Joseph) was facing the possibility of death and he was in absolute agony,” Dr. Hahn recalled to CNA. “I felt so helpless as a father…I got down on my knees around midnight and I began to try to connect with God.” As he prayed and pleaded for his son’s safety, Hahn said he became intensely aware of the presence of others in the room. “That room got really crowded with Saint Francis of Assisi, Saint Clare and the Blessed Virgin Mary,” he said. “If somebody had flipped on the (light) switch and I had seen the faces of the saints and the angels, it wouldn’t have made them any more real.”

Hahn said his encounter with the saints that night reminded him that his “aloneness was really an illusion.” “I realized how we are enveloped in divine love,” he said. “And not just God alone, but God drawing all of us into his family as his sons and daughters…as brothers and sisters. I realized more powerfully that all this theory is true, and all this truth is real and all this reality is really beautiful and absolutely indispensable to get through everyday life.”

The theologian spends the second half of his book “Angels and Saints” delving into the lives of the saints who have helped him most in his everyday life. These saints include Therese of Lisieux, whom Hahn said provided him an example of living “as a little flower on the one side and a doctor of the Church on the other.” He also explores the life and messages of Saint Josemaria Escriva, whom he credits for practical instruction on living as a contemplative in the middle of the world. Other saints discussed include Saint Michael the Archangel, St. Irenaeus of Lyons, St. Maximilian Kolbe and many others.

He said he also hopes the book will inspire Catholics to evaluate their own prayer lives and relationships with the saints. “We live in a society where action is made a higher priority than prayer and contemplation,” Dr. Hahn said. “I think what we need to do – at least what I know I need to do – is stop acting, stop working and start sitting in quiet and prayer.”

“I think what the angels and saints show us is that when we’re doing things for God, it’s not as powerful, it’s not as productive as when we allow God to do things in us, which is almost always in quiet, in the interior,” he said.

Also out this month from Hahn is the book “Evangelizing Catholics: A Mission Manual for the New Evangelization” (Our Sunday Visitor). Though the books published separately, Dr. Hahn said the works go hand-in-hand. “To me, it’s a lot like how we live in our own bodies; we inhale, and then we exhale,” he reflected. “We inhale when we receive the Holy Spirit, the breath of God. And we do that through the sacraments…also with the saints as we pray and receive more and more of God’s life.”

“The point of that sort of prayer is to be sent out on a mission,” he continued. “And that mission is clear, it’s the New Evangelization.”

WHO ARE WE BEFORE THE CHILD JESUS?

THE SOCIAL LANDSCAPE IS CHANGING — FAST FORWARD OR FAST BACKWARD?

THE FIVE LOVE LANGUAGES: How to Express Heartfelt...

HOW TO HAVE REAL HAPPINESS AT WORK

SERVING AND BLESSING: WAYS TO LIVE OUR SPIRITUALITY...

THE LANGUAGES OF LOVE