MANILA, Philippines – He preaches against gossip, reminds us to finish our meals, and even tells us not to fear marriage.
Described as the “world’s parish priest,” Pope Francis goes beyond abstract theology, and gives us advice we can use daily.
What lessons from him can we bring into 2014?
Rappler compiles 10 of the Pope’s most memorable quotes in the form of New Year’s resolutions. This is the Pope Francis list. 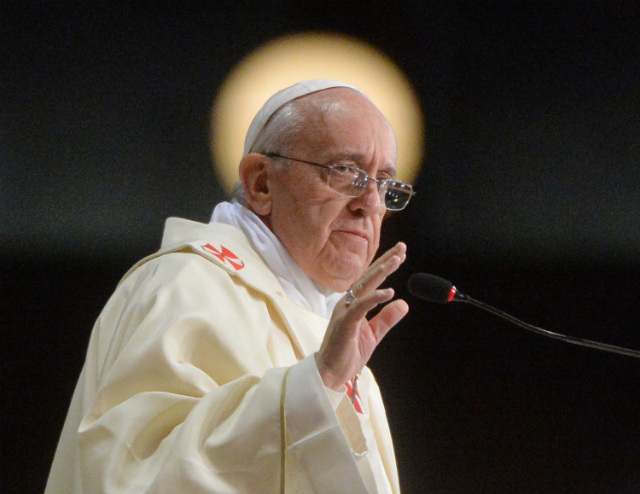 1. Don’t gossip.
It’s one of our hobbies. For Francis, it’s also one of the most evil activities.
The Catholic leader denounces gossip as “murder.”
He feels so strongly about it that in less than a year as pontiff, Francis has preached against gossip in at least 6 different instances. Read the following homilies by Francis as well as a recent speech:
(READ: Be professional and don’t gossip, Pope tells Church officials)
He says when we gossip, we “are doing what Judas did,” and “begin to tear the other person to pieces.”
“Every time we judge our brother in our hearts or worse when we speak badly of them with others, we are murdering Christians,” Francis says. “There is no such thing as innocent slander.” 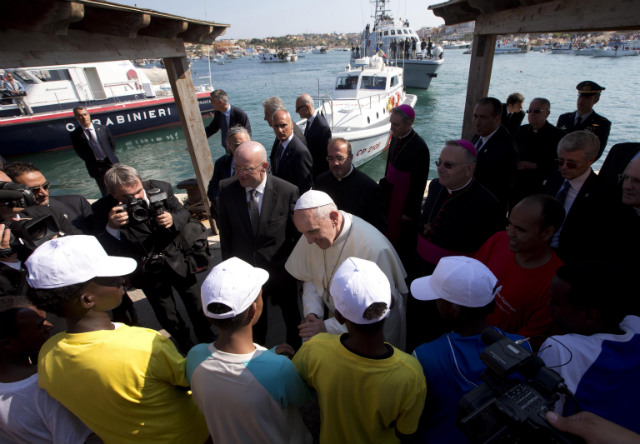 FOR THE POOR. Voicing concern for the neglected, Pope Francis slams the ‘culture of waste’ that leads to the ‘globalization of indifference.’ Francis speaks with migrants during his visit to the island of Lampedusa, southern Italy, on July 8. File photo by Alessandra Tarantino/EPA/Pool
2. Finish your meals.
No leftovers, please.
Named after a 12th-century saint who lived in poverty, Francis slams a “culture of waste” that neglects the plight of the hungry. (READ: Pope: Wasting food is stealing from the poor)
Nearly 870 million people suffer from chronic malnutrition, says the Food and Agriculture Organization. (VISIT:#HungerProject)
The Pope says: “We should all remember… that throwing food away is like stealing from the tables of the poor, the hungry! I encourage everyone to reflect on the problem of thrown away and wasted food to identify ways and means that, by seriously addressing this issue, are a vehicle of solidarity and sharing with the needy.” 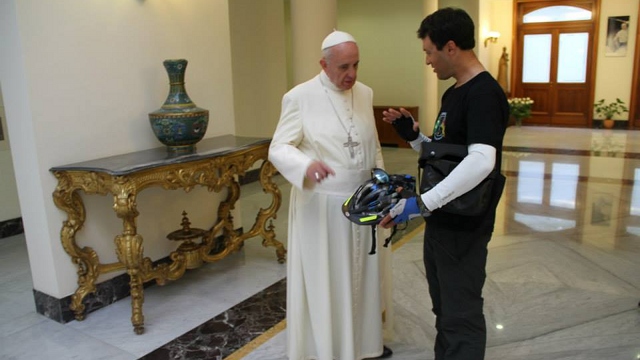 WISH GRANTED. Pope Francis invites and chats with Leandro Martins, a non-Catholic biker who randomly requests a meeting with him. Photo courtesy of Leandro Martins
3. Make time for others.
Tending to 1.2 billion members, Francis seems too busy for anything else.
That is, until he calls up strangers. Or entertains a random biker. Or sends a handwritten letter to a Jesuit he has never met. 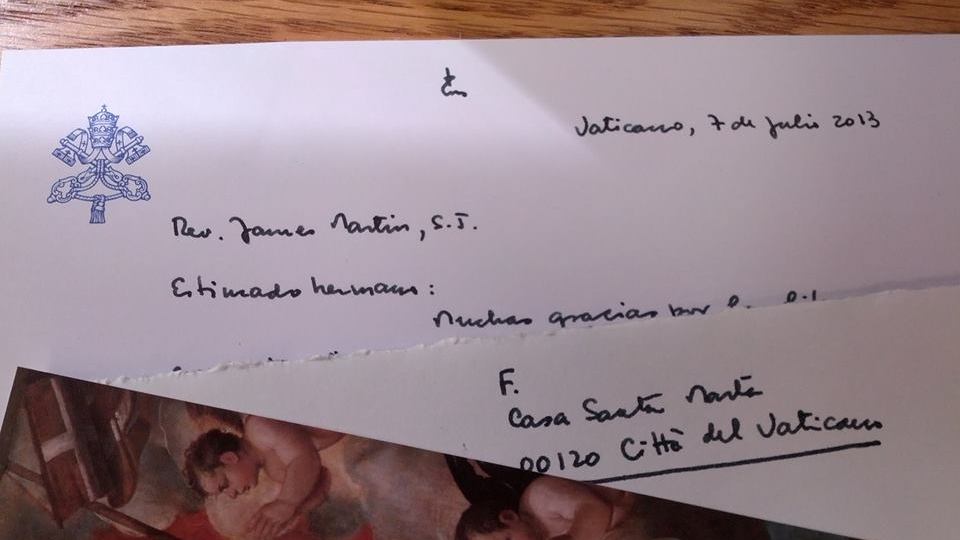 FROM THE POPE. Fr James Martin gets a handwritten ‘thank you’ note from Pope Francis. Photo courtesy of Fr James Martin
The Jesuit who got the letter, Fr James Martin, says Francis inspires him “to be more generous in my own life with my time.”
Martin says: “If the Pope can find time to be kind to others, if he can pause to say thank you, if he can take a moment make someone feel appreciated, then so can I. So can we.” (READ: Making time for others: the Pope’s way) 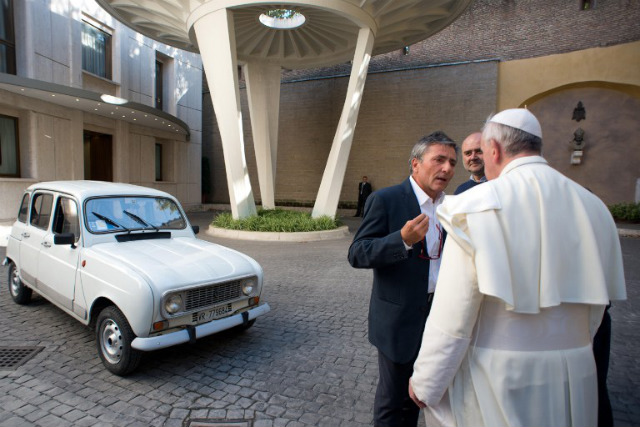 ‘HUMBLE CAR.’ This handout picture released by the Vatican Press Office on September 10 shows Pope Francis speaking with collaborators next to a white Renault 4L offered by Fr Don Renzo Zocca (unseen) on September 7 at the Vatican. File photo by Ossevatore Romano/AFP
4. Choose the ‘more humble’ purchase.
Take it from the head of state who rides a 29-year-old Renault.
In July, he warns against luxurious lives that seek “the joy of the world in the latest smartphone, the fastest car.” (READ:Pope hits priests, nuns with brand-new cars)
“Cars are necessary,” he says, “but take a more humble one. Think of how many children die of hunger and dedicate the savings to them.”
The Pope preaches against materialism. “Certainly, possessions, money, and power can give a momentary thrill, the illusion of being happy, but they end up possessing us and making us always want to have more, never satisfied. ‘Put on Christ’ in your life, place your trust in him, and you will never be disappointed!” (READ: Pope warns youth against materialism)
He calls for a “sober and essential lifestyle.” (READ: Pope: Choose ‘sober’ lifestyle, share wealth) 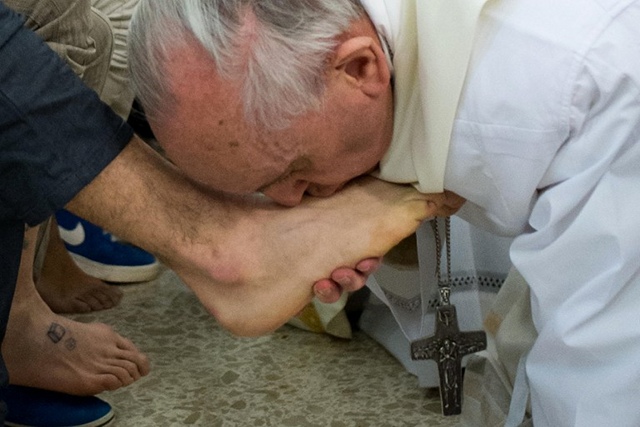 ‘IN THE FLESH.’ This handout picture released by the Vatican press office shows Pope Francis (R) kissing the feet of a young offender after washing them during a Mass at the church of the Casal del Marmo youth prison on the outskirts of Rome as part of Holy Thursday. Photo by Osservatore Romano/AFP
5. Meet the poor ‘in the flesh.’
Sure, we donate to charity. But this is not enough for Francis.
Commitment to the poor, he says, must be “person to person, in the flesh.” (READ: #ReliefPH: Pope Francis on disaster, charity)
Known as pro-poor even when he was archbishop, he explains more in the book On Heaven and Earth, which was published 3 years before he became pontiff. “It is not enough to mediate this commitment through institutions, which obviously help because they have a multiplying effect, but that is not enough. They do not excuse us from our establishing personal contact with the needy. The sick must be cared for, even when we find them repulsive and repugnant. Those in prison must be visited.”
He calls for long-term commitment. “Hospitality in itself isn’t enough. It’s not enough to give a sandwich if it isn’t accompanied by the possibility of learning to stand on one’s own feet. Charity that does not change the situation of the poor isn’t enough.” (READ: Pope Francis and Zamboanga’s refugees)
‘DON’T JUDGE.’ Pope Francis reminds priests and bishops to avoid prejudice. File photo by Antonio Lacerda/EPA
6. Stop judging others.
In the same way he denounces gossip, Francis condemns prejudice.
He reminds “intolerant” Catholics, for one, to respect atheists. “If we, each doing our own part, if we do good to others, if we meet there, doing good, and we go slowly, gently, little by little, we will make that culture of encounter: we need that so much. We must meet one another doing good.” (READ: Pope to ‘intolerant’ Catholics: Good atheists exist)
He also says of gays: “If someone is gay and seeks the Lord with good will, who am I to judge?” (READ: Pope Francis is gay magazine’s Person of the Year)
Francis urges us “to keep watch over ourselves.” “Let us not forget that hatred, envy, and pride defile our lives!” (READ:Pope’s 1st clarion call: Protect creation)
CHARISMATIC PONTIFF. Pope Francis even prays for one of his worst critics. File photo from Luca Zennaro/EPA/Pool
7. Befriend those who disagree.
What can we do to our worst critics? We can take our cue from Francis.
In November, Francis surprises Mario Palmaro, a traditionalist who wrote the article, ‘The Reason Why We Don’t Like This Pope.’” “He just wanted to tell me that he is praying for me,” says Palmaro, who is gravely ill, in an article by the Catholic News Agency.
Francis does this in line with what he calls a “culture of encounter.”
He says in July: “When leaders in various fields ask me for advice, my response is always the same: dialogue, dialogue, dialogue. It is the only way for individuals, families, and societies to grow, the only way for the life of peoples to progress, along with the culture of encounter, a culture in which all have something good to give and all can receive something good in return. Others always have something to give me, if we know how to approach them in a spirit of openness and without prejudice.” 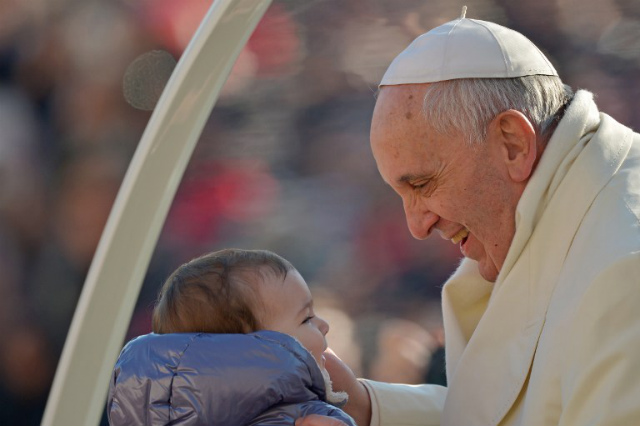 FRUIT OF MARRIAGE. Pope Francis holds a baby, the fruit of a sacrament that he says is not ‘out of fashion.’ File photo by Vincenzo Pinto/AFP
8. Make commitments, such as marriage.
Don’t be afraid to say “forever.”
Francis advises the youth, for instance, not to fear marriage. (READ: Pope: Marriage not ‘out of fashion’)
The Pope says: “Today, there are those who say that marriage is out of fashion; in a culture of relativism and the ephemeral, many preach the importance of ‘enjoying’ the moment. They say that it is not worth making a life-long commitment, making a definitive decision, ‘forever,’ because we do not know what tomorrow will bring.”
“I ask you, instead, to be revolutionaries, to swim against the tide; yes, I am asking you to rebel against this culture that sees everything as temporary and that ultimately believes that you are incapable of responsibility, that you are incapable of true love. I have confidence in you and I pray for you. Have the courage ‘to swim against the tide.’ Have the courage to be happy,” he says.
SEEKING THE LORD. Pope Francis leads the global day of prayer and fasting for Syria in September. File photo by Alessandro di Meo/EPA
9. Make it a habit to ‘ask the Lord.’
Bothered about the future?
Pray, the Pope urges us especially the youth.
“Dear young people,” he says, “some of you may not yet know what you will do with your lives. Ask the Lord, and he will show you the way. The young Samuel kept hearing the voice of the Lord who was calling him, but he did not understand or know what to say, yet with the help of the priest Eli, in the end he answered: ‘Speak, Lord, for I am listening’ (cf. 1 Sam 3:1-10). You too can ask the Lord: What do you want me to do? What path am I to follow?” 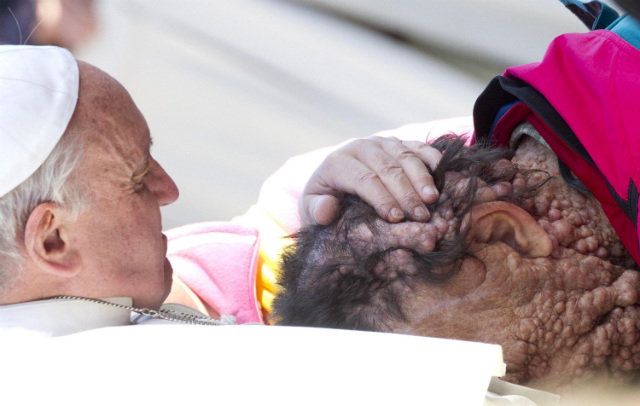 ‘JOY OF THE GOSPEL.’ Challenging his flock to share joy with others, Pope Francis embraces a disfigured man in November. Photo by Claudio Peri/EPA
10. Be happy.
The true Christian, says the Pope, exudes great joy. He says keeping this joy to ourselves “will make us sick in the end.”
So important is joy to him that his first apostolic exhortation, the first major document he wrote on his own, is titled “Evangelii Gaudium” (The Joy of the Gospel).
“Sometimes these melancholy Christians’ faces have more in common with pickled peppers than the joy of having a beautiful life,” Francis says in a homily. “Joy cannot be held at heel: it must be let go. Joy is a pilgrim virtue. It is a gift that walks, walks on the path of life, that walks with Jesus: preaching, proclaiming Jesus, proclaiming joy, lengthens and widens that path.”
Francis says, “The Christian sings with joy, and walks, and carries this joy.”
This joy, he reminds us, should translate to love of neighbor.
A joyful New Year to all!

WHY DO CAMELS HAVE HUMPS AND LONG EYELASHES?

God is using Pope Francis to teach us and show us the way to the Father.

The Holy Father then directed his attention to the “confirmandi”, those youth who were to received the sacrament of Confirmation, exhorting them to remain steadfast in the journey of faith. The Pope encouraged the youth to “swim against the tide” with the courage given to them by the Lord.