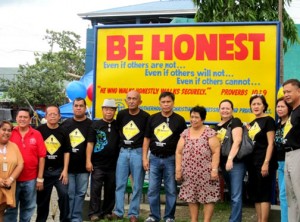 CH Ric Nepomuceno, PSD Roy and Teling Pangilinan, Senior Members Minni Dilao and Bebot Gillesania led a group of BCBP members who left for Albuera, the town next to Ormoc City at around 3:30p.m for the unveiling of two Be Honest billboards. The group promptly started a motorcade from the municipal hall at 4p.m. to the town’s public market for the 1st billboard then proceeded to the town’s Sibugay Mountain Resort at Brgy. Soob for the unveiling of another billboard. The unveiling was attended by the town mayor Hon. Erlinda Dela Victoria and daughter Lisa, and the town’s chief of police P/Insp. Teofilo Lucelo.