This article is shared by Ceferina ( Inday Sin, sister of Card. Sin); we received it from several internet yahoo mail sources plus several via text. Thanks to all who sent this to me. Nancy Catan, KAPATIRAN editor.

It is a year now since Pope Benedict XVI shocked the world with his resignation. We watched his departure and felt a sense of loss and anticipation as he was whisked away, leaving the cardinals to elect his successor. Now, nearly a year into his pontificate, Pope Francis has captured the world’s imagination, showing an active, vital, and extroverted approach to the papacy that challenges the Church and the world to re-examine the life and claims of Christ the Lord. 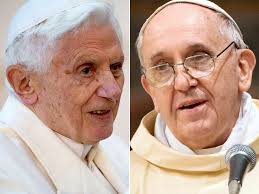 Never before have two popes lived side by side at the Vatican, and never before have we had such a joint witness of the importance of the the example of Mary and Martha, the two sisters who were friends of Jesus. Their story is told in the tenth chapter of St. Luke’s Gospel: Jesus and his disciples were visiting the sisters’ home, and Martha was busy preparing the meal and looking after the guests while her sister Mary sat at the Lord’s feet doing nothing to help. Martha complained that Mary was leaving her to do all the work, but then Jesus gently chided Martha, saying that Mary had “chosen the better part.”

Since that time, the two sisters have symbolized two strands of the Christian life – the contemplative and the active. Throughout Christian history, the saints have invariably been stronger in one aspect or the other. Here, a saint will be a courageous missionary or champion of the poor, out in the streets and in the front line of the battle. There, another saint will start a monastic order, retreat to a hermitage, or live in a library reading, thinking, and writing. Together, Mary and Martha represent prayer and action, and both are needed for the Gospel to move forward.

Now at this crucial time in human history, the Church offers in these two living popes an image of the unity of prayer and action. Pope Emeritus Benedict may have stepped off the world stage, but he still wears the white cassock of his office, and remains is a powerful presence behind the scenes in his Mater Ecclesiæ hermitage. Here, Benedict XVI’s life of prayer – like that of the Blessed Virgin Mary, for whom the hermitage is named – will be one in which he withdraws from the public eye and, like her, “ponders all these things in his heart.”

It is also significant that one of the few public events at which the two popes presided together was the blessing of a new statue of St. Michael the Archangel in the Vatican grounds. Francis speaks much of the battle against Satan, and I believe both popes are very aware of ominous signs in the ongoing battle between darkness and light. Both popes are aware of the need for a powerful prayer presence behind the public ministry of Pope Francis. If Benedict is the contemplative “Mary,” then Francis is the active “Martha,” and just as the contemplative Mary needs the active Martha, the active Martha relies on the prayers of Mary.

Having just visited Rome for a conference on the New Evangelization, I can affirm that every street, every alleyway, every church and city square is crammed with history and seems to harbor a deeper level of meaning. So it is with the two popes – their chosen names and even their lodgings signify their identity and their role. The papal apartments in the apostolic palace stand empty. Both popes have chosen to live elsewhere: Benedict in a monastery dedicated to Mary, and Francis in a hostel dedicated to Martha.

Together, the two brothers, Francis and Benedict – like the two sisters, Mary and Martha – are holding up the two arms of the Church in prayer and service. The lives and personalities of both popes balance and complement. It is no wonder that Pope Francis speaks so fondly of Pope Benedict; the two are brothers in arms, and while Benedict will remain firmly out of sight, his intellect, his heart of worship, and his life of prayer will continue to be the quiet but effective influence he has offered the Church throughout a long life of service.
———————————————
The Rev. Dwight Longenecker is the parish priest of Our Lady of the Rosary in Greenville, South Carolina. His latest book is The Romance of Religion: Fighting for Goodness, Truth and Beauty . Learn more about it at his website, dwightlongenecker.com.

WELCOME THE HOLY SPIRIT AND GIVE MORE, EXPECT LESS