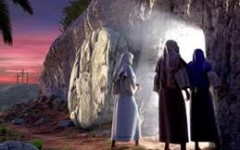 VATICAN CITY, April 04, 2013 (Zenit.org) – Pope Francis on Wednesday stressed the importance of recognizing the presence of the Risen Christ, like the women who were the first witnesses of his resurrection.

In what was Francis’ second general audience, he took up the catechesis series on faith begun by Benedict XVI.

“Today we continue the Catechesis of the Year of Faith. In the Creed we repeat this phrase: ‘On the third day he rose again according to the Scriptures.’ This is the event we are celebrating: the Resurrection of Jesus, the center of the Christian message,” he said.

The Holy Father asked how the truth of faith in the resurrection of Christ been transmitted to us.

“Since the first steps of the Church, faith in the mystery of the death and resurrection of Jesus has been very firm and clear,” he observed.

He then considered how this faith has been passed on through the narrative-testimony of the Gospels.

“First, we notice that the first witnesses of this event were women,” the Pontiff said. “[…] Women are driven by love and know how to welcome this announcement with faith: they believe, and immediately they transmit it, they do not keep it to themselves. The joy of knowing that Jesus is alive, the hope that fills our hearts, cannot be contained.”

Francis said that this natural sharing of joy should also occur in the lives of Christians today.

“Let us feel the joy of being Christians,” he said. “We believe in a Risen Lord who has defeated evil and death! Let us have the courage to ‘come out’ to bring this joy and this light into all the places of our lives! The resurrection of Christ is our greatest certainty; it is our most precious treasure! How can we not share with others this treasure, this certainty? It is not only for us, it is to be communicated, to be given to others, to be shared with others. This is precisely our testimony.”

Francis also considered how the Gospels relate that women were the first witnesses, even though Jewish law of the time would not have recognized women’s testimony.

The Holy Father said that this reality is “beautiful.”

“This is to some degree the mission of women: of mothers, of women,” he said. “To give witness to their children, their grandchildren, that Jesus is alive, he is the Living One, he is risen. Mothers and women, go forward with this testimony!”

The Pontiff said that this leads to a reflection “on how women in the Church and in the journey of faith, have had and now have a particular role in opening the doors to the Lord, in following him and communicating his face, because the gaze of faith always needs the simple and profound gaze of love.”

Francis said that in our faith journey, “it is important to know and feel that God loves us.

“Don’t be afraid to love Him: faith is professed with the mouth and the heart, with words and with love,” he said.

“For us too there are many signs in which the Risen One makes himself recognized: Sacred Scripture, the Eucharist, the other sacraments, charity, those gestures of love that bring a ray of the Risen Lord,” Francis added. “Let us allow ourselves to be enlightened by the resurrection of Christ, let us allow ourselves to be transformed by his strength, so that also through us in the world, the signs of death may give way to signs of life.”

BCBP Time is On Time