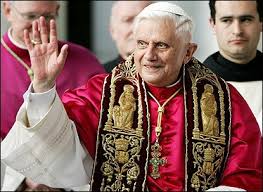 Public service is a “noble vocation” proclaimed Pope Benedict XVI during his Apostolic Journey to Cyprus last June 2010 when he addressed government officials and diplomats. “Each of you in your lives of public service must be committed to serving the good of others in society, whether at the local, national or international level. … When carried out faithfully, public service enables us to grow in wisdom, integrity and personal fulfillment.”

In view of the more than 100 BCBP members now in various levels of public service, we share excerpts of the Pope’s talk adapted from the Full Text source: www.zenit.org/article-29484?l=english for the encouragement and guidance in their responsibilities.

The Pope cited ancient philosophers, great Islamic and Christian philosophers, who believed that the practice of virtue consisted “in acting in accordance with right reason, in the pursuit of all that is true, good and beautiful.”

As members of the human family created by God, he believes that “we are called to foster unity and to build a more just and fraternal world based on lasting values. In so far as we fulfil our duty, serve others and adhere to what is right,” he continued, “our minds become more open to deeper truths and our freedom grows strong in its allegiance to what is good.”

The Pope emphasized the importance of truth, integrity and respect in the public servant’s relationships with his constituents and others, saying that such relationships are often the determining factor in establishing trust and stronger bonds of friendship between individuals, peoples, and nations. He encouraged the government officials and diplomats to “seize the opportunities afforded you, both personally and institutionally, to build these relationships and, in so doing, to foster the greater good of the concert of nations and the true good of those whom you represent.”

Benedict XVI noted the necessity of clear moral insight and courage so that policies may be purified “of selfish interests or partisan pressures” resulting in the legitimate aspirations and human dignity of the people they represent being properly respected, protected and fostered.

The Pope posed the question: “How can the pursuit of truth bring greater harmony to the troubled regions of the earth?” He then suggested three ways to consider: by promoting moral truth that is responsibly based on factual knowledge; by deconstructing political ideologies which distort and/or supplant the truth; and, by basing legal policies upon the ethical principles of God’s natural law.

Source: Adapted from Full Text of the Pope’s talk: www.zenit.org/article-29484?l=english

MY LIFE AS THE WIFE OF AN OFW