A strange title for a Christmas article, don’t you think? Let me explain: It’s Christmastime once again, and the annual rush for decorations, cards and gifts is in full swing. Year in and year out, we find ourselves lamenting the fact that during Christmas, commemorating the birth of Jesus is more and more crowded out by our preoccupations over parties and presents. We would like very much for our families to celebrate Christmas in terms of what it really means. And so to get to that true significance, let us first examine some of our commonly accepted beliefs and practices surrounding the season.

Let’s start with Christmas Day itself. We all know that no actual date is ever mentioned in the Bible. Historians can only be certain that it was NOT on December the 25th. Yet the faithful had to have a day for celebrating Jesus’ birthday. Of course the Catholic Church had its reasons for selecting the date, which coincides with the week-long Roman Saturnalia, honoring the god Saturn and celebrating the Winter Solstice. However, with diligent Bible sleuthing and a sufficient knowledge of the Jewish calendar and feast days, one can actually deduce a September birthdate in the year 5BC. At any rate, the earliest celebrations, called “The Feast of the Nativity,” began in Rome at around the 4th century, spread to Egypt, and reached England by the end of the 6th Century.

Ever since these early days, there have always been Christians who opposed the celebration of Jesus’ birthday. However, current religious backlash has less to do with debating the actual birthday of Jesus and focuses more on the commercialism of Christmas, and the Santa Claus focus.

Which brings us to gift-giving. This tradition is often explained using the biblical nativity story, when the Wise Men came to Bethlehem bearing presents of gold, frankincense and myrrh for the baby Jesus. Our present day tradition of gift giving however actually originates from a different source.

Early Christmas celebrations were boisterous and disruptive, not unlike Saturnalia festivities. The lower classes in particular enjoyed a certain amount of freedom outside of the normal behaviors expected of them by society. Because they usually owed debts and were often in servitude to the rich, they demanded that the rich give them goods in exchange for their goodwill. Writer Nissenbaum says, “Christmas presents had their origin in wassailing and other forms of Christmas begging, in which the poor demanded gifts from the neighboring gentry- generally gifts of food and drink, to be consumed on the spot.”

It was not until Santa Claus had become popular that the Christmas tradition transformed from a disorganized, even unruly, community event into a more tame, family-centered holiday. 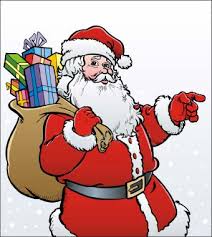 The origins of Santa Claus can indeed be traced back to St. Nicholas. Believed to have been born in the 3rd century, St. Nicholas began life as Bishop of Myrna, in Persia. One of the most popular saints in the entire world, he is the patron saint of sailors, unmarried maidens, thieves, merchants, the country of Greece, Russia and hundreds of churches throughout Western Europe. Through generations of folklore and legend, Saint Nicholas became associated with the Christmas season as a gift bearer. According to legend, there were once three girls who were to be sold into slavery since their father could not afford to marry them off. St. Nicholas was said to have provided dowries for them by throwing a bag of gold through the window. This bag of gold landed in a sock left to dry by the fire, and together they give us the Christmas stocking tradition.

The St. Nicholas Center claims that the first European explorers brought St. Nicholas lore with them to the Americas. Interestingly, it was in the United States that the stern St Nicholas – who also became patron saint of New Amsterdam, the present-day New York – morphed into jolly Santa Claus, the kind-hearted person described in the 19th Century poem by Clement Clarke Moore, “A Visit from St. Nicholas” (also known by its famous first line, “Twas the Night Before Christmas”). For completing the transition of St. Nicholas, credit goes to cartoonist Thomas Nast, who conjured up the jovial, rotund Santa Claus everyone knows today.

Having clarified some common myths about Christmas, the religious significance of Jesus Christ’s birth remains unaltered. More correctly: knowing that it is not the date, nor the trimmings, nor the gifts that make Christmas should open us to a stripped-down – and therefore pure and deepened – regard of the occasion.

Just recently I was joking with my youngest daughter about the Christmas rush, and I said I wished everyone would stop decorating and shopping, and instead just quiet down to contemplate the wondrous, stupendous love that God gives us. And in a very big way, I wasn’t really joking. My favorite Bishop Fulton Sheen thinks so too: 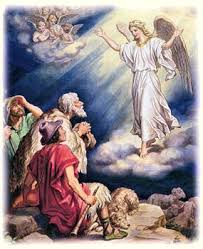 “There were only two classes of men who heard the cry that night: shepherds and wise men; shepherds, men who know they know nothing, and wise men, men who know they do not know everything. And the shepherds found their Shepherd and the wise men discovered Wisdom, and the Shepherd and the Wisdom was a little baby in a crib.
“Watch that little baby in that crib, and listen to God’s message on that Christmas night.”

THE MINISTRY OF WOMANHOOD – PART II