Q & A: WHAT IS THE POPE’S RESPONSIBILITY? 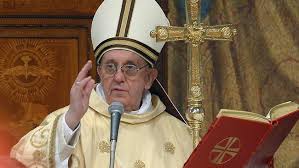 As successor of St. Peter and head of the college of bishops, the Pope is the source and guarantor of the Church’s unity. He has the supreme pastoral authority and the final authority in doctrinal and disciplinary decisions.

Jesus gave Peter a unique position of preeminence among the apostles. This made him the supreme authority in the early Church. Rome, the local Church that Peter led and the place of his martyrdom, became after his death the internal reference point of the young Church. Every Christian community had to agree with Rome; that was the standard for the true, complete, and unadulterated apostolic faith. To this day every Bishop of Rome has been, like Peter, the supreme shepherd of the Church, whose real Head is Christ. Only in this capacity is the Pope “Christ’s Vicar on earth”. As the highest pastoral and doctrinal authority, he watches over the transmission of the true faith. If need be, he must revoke commissions to teach doctrine or relieve ordained ministers of their office in cases of serious failures in matters of faith and morals. Unity in matters of faith and morals, which is guaranteed by the Church’s Magisterium, or teaching authority, with the Pope at the head, is one reason for the remarkable resilience and influence of the Catholic Church. (YOUCAT question 141)

YOU ARE WHAT YOU EAT…

Q & A: WHAT IS THE DIFFERENCE BETWEEN...

SOCIAL JUSTICE: WHERE DO WE BEGIN?

WHY IS CARING FOR OUR ENVIRONMENT A MORAL...