Q & A: WHY DO WE HAVE LITURGY? IS THERE A LITURGY IN HEAVEN?

Why We Have Liturgy: An Exercise of Jesus’ Priestly Office 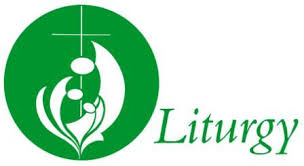 Answered by Legionary of Christ Father Edward McNamara, professor of liturgy and dean of theology at the Regina Apostolorum university.

Q: Is there a liturgy in heaven? Why do we have a liturgy? What is the finality of the liturgy? — T.G., Salvador, Brazil

A: These are very important questions. Sometimes we can get so caught up in the details of liturgy that we forget the big picture of the great mystery of the liturgy itself.

There are many definitions of liturgy. One famous manual published in the 1960s presented 40 definitions and then added a 41st. For our purposes we can take that offered by the Second Vatican Council’s constitution on the liturgy, “Sacrosanctum Concilium,” which in turn relies heavily on Pope Pius XII’s 1947 encyclical “Mediator Dei.”

“7. … Rightly, then, the liturgy is considered as an exercise of the priestly office of Jesus Christ. In the liturgy the sanctification of the man is signified by signs perceptible to the senses, and is effected in a way which corresponds with each of these signs; in the liturgy the whole public worship is performed by the Mystical Body of Jesus Christ, that is, by the Head and His members.

“From this it follows that every liturgical celebration, because it is an action of Christ the priest and of His Body which is the Church, is a sacred action surpassing all others; no other action of the Church can equal its efficacy by the same title and to the same degree.

“8. In the earthly liturgy we take part in a foretaste of that heavenly liturgy which is celebrated in the holy city of Jerusalem toward which we journey as pilgrims, where Christ is sitting at the right hand of God, a minister of the holies and of the true tabernacle; we sing a hymn to the Lord’s glory with all the warriors of the heavenly army; venerating the memory of the saints, we hope for some part and fellowship with them; we eagerly await the Savior, Our Lord Jesus Christ, until He, our life, shall appear and we too will appear with Him in glory.”

Section one of the second part of the Catechism of the Catholic Church develops these ideas in more detail (nos. 1076-1209).

Therefore, we can distinguish various aspects in liturgy. 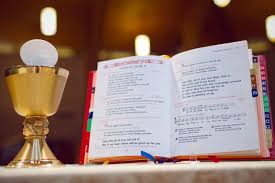 First of all there is the essential action of Christ our high priest who offers his sacrifice to his heavenly Father in the unity of the Holy Spirit. We, as the Church of baptized and confirmed Christians endowed with the royal or common priesthood, in hierarchical communion with the ordained priestly ministry, are enabled to join with Christ in this eternal offering and present our own spiritual gifts alongside his.

Another aspect of liturgy is that this mysterious union with Christ our high priest is carried out through perceptible signs. Some of these signs come from Christ himself such as the use of bread and wine for the Eucharist and of water and the Trinitarian formula for baptism. Most of them, however, such as the rites, songs and prayers used in the liturgy, have been developed over time by the Church. These rites, songs and prayers are usually inspired by Scripture and serve to clarify the deeper meaning of the essential mysteries.

These latter signs, being of human origin, can sometimes lose their meaning over time and can even obscure, rather than facilitate, contact with the mystery. For this reason the Church’s highest authority has the power to make those changes it considers necessary to those elements that do not come directly from Christ.

Thus a first answer to the question as to why we have a liturgy is fundamentally because Christ is the Word Incarnate and he has determined to establish his Church and that he will offer his salvation to all people through this Church and through the sacraments, the signs that he has established as prolongations of the Incarnation in which all are invited to participate. It is beyond the scope of this reply to enter into the question by what means those outside the Church may be saved. We can say, however, that there are no other visible means of salvation outside of Christ and the Church. However, if anybody is saved outside the visible Church, that salvation has been obtained, in some mysterious way, through Christ and the Church. This is why the Church prays in Eucharistic Prayer IV “for all who seek you with a sincere heart” and for “all the dead whose faith you alone have known.”

The finality of liturgy is also a deep question. In some cases such as baptism the liturgy is an essential means of salvation; in other cases it is a means of sanctification and also a school of prayer and of Christian life. It must be admitted that these are not the primary reasons for doing liturgy in its fullest celebratory form.

In a way we could say that the Church itself, in the common preface to the Eucharistic Prayer, opens up a new horizon for the reason for liturgy. In this dialogue we hear:

“Lift up your hearts”

“We lift them up to the Lord”
“Let us give thanks to the Lord our God”
“it is right and just”
“it is truly right and just, our duty and our salvation, at all times to acclaim you, O, Lord …”

Hence the fundamental reason we do liturgy is that it is “right and just.” There is no utilitarian end, and it is done because there is nothing greater in the world that we can do. We also do it because in this way we freely respond to divine love with love and worship and, as a consequence, receive the greatest free gift of all, the life of God himself in our souls.

This is why the great German theologian Romano Guardini (1885-1968) was able to describe what he termed the ludic aspect of the liturgy, or the liturgy as play or game. Just as play is done because it is worthwhile in itself and is not primarily utilitarian, the liturgy is analogous in that it is carried out because it is right and just and worthwhile in itself. Also, just as a move or a score in a game can be considered as original, brilliant, or beautiful only if achieved by players who follow the established rules and do not cheat, likewise true originality and beauty in liturgy is found within the context of its established norms and rules.

So, is there a liturgy in heaven? We can say yes insofar as in heaven our participation in that joyful union with Christ our high priest in his eternal offering to his Father becomes a permanent possession of the soul.

We can say no if we mean the external aspects of liturgy such as rites and signs which are meant only for our earthly journey as a foretaste of things to come.

These questions are so deep and vast that our present answer will certainly not do them justice, and there is much more that could be added. We hope at least that this opens up the horizons a little.

PUT AWAY CELL PHONES AND HAVE REAL ENCOUNTERS