I come from an above-average family, with a supportive father and a loving mother. Yet at 13, I was already tasting alcohol. At 15, I was already smoking marijuana. I stole from my parents just to avail of the drug. Though I managed to get through high school, my peers did not. They ended up either in rehab, in jail, or the cemetery. All these, however, did not stop me from my pleasure-seeking ways.

Despite my addiction, I managed to get through college and get employed in a bank. I was already becoming successful, with promotions and accomplishments beginning to be common. I attributed all of these good fortunes to my capabilities and not once to God. On the contrary, I often blamed God for my failures. 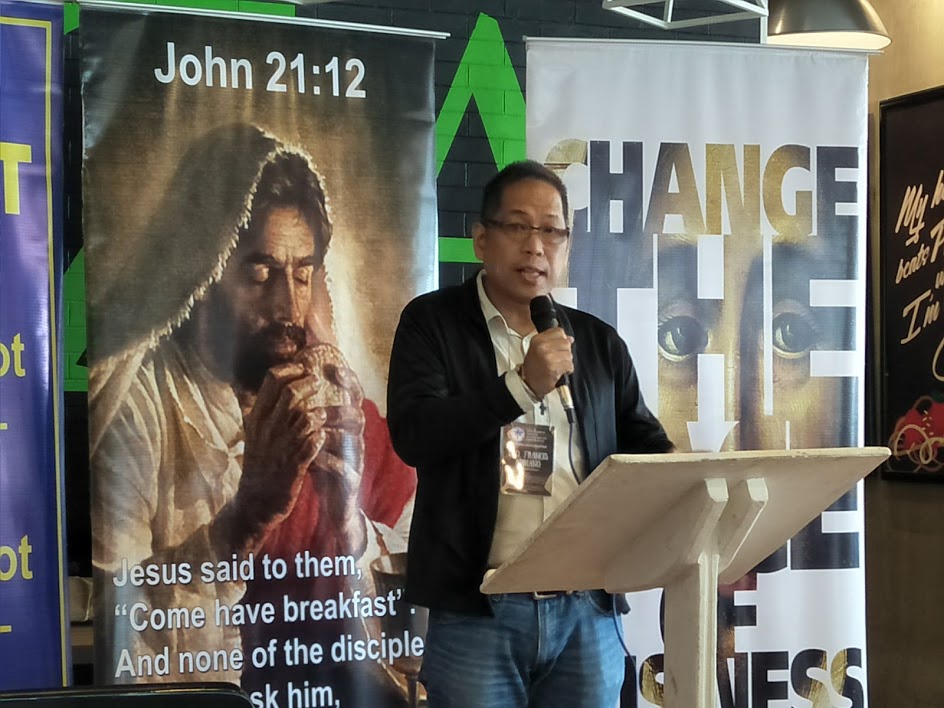 In 1981, I married my college girlfriend Tanya. Five years later, I left for Australia. But it did not take long before my father asked me to return to the Philippines. Apparently, my father was already sick and he wanted to see me before he passed away. After my father’s death in 1988, I took the Board Examination for Customs Broker. I landed second place. The following year, I was already working at the Bureau of Customs.

In my early days at the Bureau, I was straightforward and honest. I did what was right. But temptations, peer pressure, and the need to be accepted were simply too strong. Soon enough, I got into the flow and imbibed the culture — the Customs way of life. I became part of the system: A breed of ABC—alligator, buwaya and crocodile.

Money became my new god, I started having “table transactions” — above the table, under-the-table, and including the table. I earned P50,000 plus a day and yet it was not enough. Beautiful women followed and became easy to obtain.

It was then that I had relationship with someone who gave me a son. Too much money eventually led me to the bottom of the pit where I learned to use shabu. I trusted no one—not even my own mother and siblings. The little goodness left in me vanished. I turned out to be like the devil—hostile, violent, dishonest, greedy, lustful, and selfish.

Shabu destroyed everything good in me. It poisoned my mind and hardened my heart. At my lowest point, I even tried to kill myself. My life was meaningless.

My mother found out. She prayed that God would give me a new heart and that I would surrender my life to Christ. She brought me to Makati Medical Center for treatment. But a week after being dispensed, I was back to my old ways.

Something supernatural happened after that. I started seeing a flashing light with the words “My Way” in the appearance of a dove. My mother gave me a book titled, “The Way,” written by St. Josemaria Escriva, the founder of Opus Dei. When I opened the pages, it seemed the book was alive and was speaking to me.

That night, I had a dream. It was so vivid. I saw a bearded man with glowing light around him entering my room and touching me. He said, “My child, come and follow me. You will feel joy and peace you’ve never felt before.”

One morning, on the way to my office, scared of what was happening to me, I passed by the adoration chapel of St. Joseph The Worker Church in Makati and entered it for the first time. The dove-shaped light I saw in my dream was there. I felt something striking me, a warm sensation filling me from head to toe. It gave me goosebumps. Tears welled from my eyes. And a peaceful bliss enveloped me. A force so powerful made me raise my hands and say, “Lord, forgive me. I surrender. I give up. Take control.”

As I began to seek God, I accepted the invitation of my sister to attend the Life in the Spirit Seminar by the BCBP. Listening to a talk about repentance and faith, I realized that to change my mind, heart, and attitude was not difficult for me since my objective in attending was to turn around. This was enough for me to turn the knob and open the door for Christ to come into my life. My bondage to drugs was so strong — but God’s spirit was stronger.

No doctors, treatments or therapy groups helped me overcome my addiction. My journey was not a matter of discipline. It was a matter of surrender. I surrendered to one of His many wake-up calls. In a flash, God healed me of my addiction.

I opened the door and what an overwhelming feeling at that time—a feeling of bliss. In an instant, Christ transformed despair and pain to hope and joy and a realization that my love for my family surpassed my desire to continue an illicit affair. With that realization, I labored hard with the help of God to change my extra-marital relationship. My live-in partner and I parted ways.

Tanya forgave me, she accepted me with open arms. We both attended and finished CLP 20 of BCBP Greenhills Chapter. In the days that followed, I sensed the battle raging within me. My desire to do illegal transactions was still there but God’s spirit gave me strength to fight back. There were times that I followed my desire and accepted bribes once again, but God’s spirit greatly disturbed and convicted me.

During those days, I increased the intensity and frequency of my prayers and visits to the adoration chapel. I built up enough courage to start refusing and accepting bribes. I started examining and appraising items correctly; and I started to be honest to my wife. One good deed led to another.

In 1993, during my prayer time, I began to sense that Christ wanted me to leave my job. I could not accept this at first. It was illogical. I had a promising career. It was our means of support. And I did not have any single centavo saved for the rainy days. As the prompting persisted for a year, I asked for prayers and guidance. And crystal clear, Christ wanted me to choose only His will. He was asking me to make a true leap of faith.

On June 19, 1994, I decided to follow God’s will and resigned my job. I decided to be a disciple of Jesus, stepping out in faith and leaving the comforts of the Bureau of Customs. God was there to hold my hand. One Wednesday night while in a prayer meeting; I was offered by a brother in Christ to head his marketing department. The income from the job was enough to meet our needs.

Everything was going smoothly. I was growing spiritually. I even headed the Prayer and Intercessory Ministry of the Greenhills Chapter. I was sharing my life in different breakfast venues. I was even one of the main sharers in the national launching of the Be Honest advocacy. I was giving talk on faith and repentance. My house was in order and we were all celebrating God’s goodness.

But it all went horribly wrong. My success entered my head. I was like an eagle soaring when the enemy hit me with an arrow. In 2007, due to busy schedules, I started missing my regular prayer time, reading the Bible, attending BCBP activities, and going to Masses and having communion.

Stripped of the armor of God, I again had a serious relationship with another woman. It was downhill from there.

In 2008, the company I was working in had a restructuring and my position was declared redundant. I put up businesses, one after another, but none prospered. The separation money I got was all blown away. My spiritual life was dead. My career was dead. My relationship with my family was dead. I was an actor attending prayer meetings and action group meetings but with guilt and heaviness in my heart. I was a great pretender. I wanted to leave the community because of this. I stopped attending BCBP activities and disappeared for seven years. I was thankful that Tanya continued attending even in my absence.

In 2010, I needed to have a source of income so I entered the academe. I became a professor at Asian Institute of Maritime Studies. As months passed, I realized that for me to be effective in helping students become the person that God wanted them to be, then I need to walk the talk. This realization was coupled with an inner voice convicting me of my sins. God saw through my heart. In the months that followed, I started to have a new beginning. I started seeing the thoughtfulness of my wife, the way she labored to keep our house in order, the way she prepared my food, the way she ensured that my clothes were all well pressed, the way she cared for my daughters. Her silent suffering touched me.

My eyes were opened to the realization that Tanya is God’s gift to me. I started to fall in love with her again. I began praying again, attending Mass again, and reading the Bible again. And God blessed me with strength to make a very tough decision –I ended my extra-marital relationship.

I sought Tanya’s forgiveness. For the second time, she forgave me. Though she has forgiven me, I know that the wounds I inflicted on her were too deep. I remembered many times when I tried communicating with her that she would ignore my presence and not speak to me. All I could do was bite my lips and stand there in stunned silence. I had to endure. I let go and let God do the working. I focused not on my troubled relationship but instead on getting close to God.

As I began getting rooted and grounded in God and His word, the Lord began dealing with my marriage and my relationship with my children. When Tanya and my daughters began noticing the new me—the one that has become serious about his relationship with Jesus — then peace and joy began to dwell in our home.

In the Bible, it is said, “Weeping may endure for a night, but joy comes in the morning.” My weeping is now over and my morning is now bright with abundance of God’s grace.

BUILDING PARADISE WITH THE LORD AS MY ARCHITECT...