REST, RISE UP, REACH OUT

By We have and will continue to be so blessed with the visit and the messages of Pope Francis. I would like to share with you some reflections and thoughts on the Pope’s message to families written by one of my granddaughters, Bianca Atienza-Gutierrez. She writes: 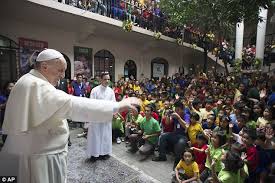 “Today I got to see Pope Francis for the 3rd time in my life. This was the closest that I’ve ever gotten to him. To see his smile, and the way he kissed that baby was so euphoric an experience. It was as if my mind and body were in different places. It’s funny how I ran so fast I didn’t realize where my feet were taking me. After that encounter, I was surprised to walk back and find that my seat was so far away from where I ran to in just a few seconds. But more than seeing him up close, I was fortunate to have witnessed his inspiring compassion and love for those who need it most. He went through the crowd, searching for the little ones, going around the arena embracing the sick. When he chatted with that disabled man who gifted him with a framed Mama Mary piece he cross-stitched with his feet, I was so moved to tears.

The highlight of the day though was hearing his words, messages that could only have been inspired by the Spirit. I felt him speak straight to me, revealing what the Lord wants for my family, and for all families. When he spoke in Spanish, it was like a song (Aaron, my husband, and I have resolved to learn Spanish this year hehe). He urged us to dream about our children. “When you lose the capacity to dream, you lose the capacity to love”. He encouraged married couples to hold on to the illusion of when we were still girlfriend and boyfriend. I loved that 🙂

And I so loved the Pope’s step-by-step approach to his instructions to families. It’s so corporate-like haha:) For me, through his message, he has showed why he truly is the right man for this job, at this time!”

Pope Francis revealed a little secret, that he has a statue of a sleeping Joseph in his quarters. He writes down his intentions and places it under the statue so that Joseph can dream about his prayer. It is these adorable little snippets that make the Pope so human, so relatable.

What struck me though was that this was his first message – rest in the Lord. Anyone who knows me, knows that this is a huge problem for me. I don’t know how to rest (where did I get it from Mama Nancy?). I like to keep myself active and productive, doing 3 things or more at a time. It annoys the heck out of my husband. I also am not able to sleep well. I sleep maybe 1-4 hours at a time, and it usually takes me a couple of hours to fall back to sleep until it’s time to get ready for work in the morning. I’ve recently decided, that rather than be frustrated with myself that I’m unable sleep, I get up when I wake in the middle of the night and do something. Reading and making rosaries, even cooking, have been popular go-to activities. 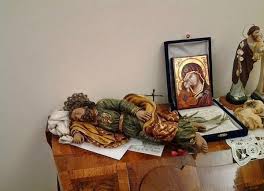 The Pope said though that it is in rest, in silence, that the Lord’s mission and message is revealed. Joseph is seldom mentioned in the Bible, but when he is, he is depicted as sleeping when the Angel comes to him and gives him his mission. While I feel that the Lord’s missions for me are clear, I am at a loss as to HOW to make it happen. I know now what to do with those waking moments. Rest! Rest in the Lord in prayer, so He can use those moments to reveal to me HOW He wants me to go forth with the mission.

The Pope calls us to rest in the Lord – pray as a family! Listen to God’s word as a family. Make a home for Jesus in the family. It is in the family that we first learn to pray, how to love, how to forgive and be generous. We will surely work on this.

“Solutions to family problems come when we take time to reflect”.
“We must go beyond our own needs to encounter God”.

2. Rising with Jesus and Mary

Once we have understood our mission on earth through resting in the Lord (this was the first point in his message), the challenge is to “Get up and act when we hear that voice”. I found it so beautiful that he started his message with Joseph’s discernment, and then the family follows that discernment.

The Pope called us to be wary of “Ideological Colonization”. My interpretation of this is how the modern world has put focus on materialism and is being brainwashed into forgetting about the values that matter. But what’s amazing about his message is, he instructs us to “Go deeply into the world”, whereas, as parents, we would really rather protect our children and shield them from the world.

3. Be the Prophetic Voice

The Pope calls us to take forward the family prophetically. The family is not just the father, the mother and the children under one roof. He calls us to extend our families to those most in need: the orphans and the elderly. Never let the elderly feel isolated, remind them that God has not forgotten them. Honestly, I really only remember hearing about him talk about the elderly. Only when I read the transcript on Rappler did I realize he also talked about orphans. I think this was meant to remind me of a vision I had when I was younger… A dream to build a home for the elderly. A holistic center by the sea, where the local community can be trained to care for these retired seniors, and help them realize there is still so much more to experience in life. Maybe it’s time to revisit that dream that has gone dormant for the past years.

“Train the children in faith so they become a blessing to society and to the world”. This strongly reinforced my reflections from Day 1 of the Pope’s visit. This is one mission: when my son grows into a soldier for the Lord, a contributing member of society, then I know I’ve done my job as a mother.

I found it refreshing that he built his messages around Joseph. Usually, when we talk about the Holy Family, we center around Mama Mary and the Baby Jesus. But the strength in Joseph’s silence has long been underappreciated. This is the kind of strength I find in my husband, aptly named after St Joseph. And I was so grateful that this whole experience was shared with him.

Just like yesterday, it was a thrill to have seen the Pope. But more than that, it was an enriching spiritual experience…. With a concrete to-do list!:)”