ROSALES: CHURCH CANNOT CONFORM HER TEACHINGS ON DIVORCE TO SURVEY 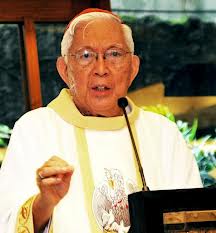 According to CBCP News, the former archbishop of the Filipino capital stressed that even if a new survey shows that 60 percent of Filipinos want divorce to be made legal, no one can change the teachings of God to suit what people want. Since Church doctrine comes from Divine Law, it cannot be changed, he said. “Even if it is 99 percent surveyed favor divorce,” he said, “what is wrong is wrong.”

Those who argue that the Church should change its stand on divorce, he noted, are asking the institution to overrule God, and are ignoring that it’s in the Bible. (Malachi 2:14-16. Mark 10:1-12. Ephesians 5:21-32. Scripture references added by KAPATIRAN Editor)

“It’s in the Bible unless you don’t believe in the Bible,” Cardinal Rosales said. “There are just too many bright people nowadays.”

According to the latest Social Weather Stations survey, about three of every five Filipinos favor the legalization of divorce for “irreconcilably separated” couples.

The poll also showed that 60 percent of the 1,800 respondents agree that couples in irreparable marriages should be allowed to divorce so they can get legally married again.
Only 29 percent disagreed.

Archbishop Emeritus of Lingayen-Dagupan Oscar Cruz said those who argue that the Church should change her teachings on divorce are asking the impossible. “The Bible says what God has joined together let no man put asunder,” he said. “The Church is duty bound to observe and to promote the teachings of Her founder, and Her founder teaches that marriage is sacred,” the archbishop continued. “Whether it will win or not in promoting the Gospel truths, that’s not Her problem anymore,” he said. “Her problem is to speak when things are wrong and to affirm when things are right.”

CHRISTIAN HOSPITALITY: HOW DO YOU MEASURE UP?

“BAHALA NA”: THE POWER OF FAITH