THE CHALLENGE OF YELLOW RIBBONS 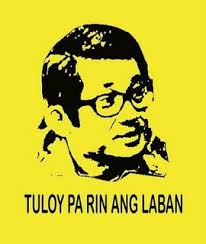 It was 30 years ago that Ninoy Aquino was assassinated on the tarmac of the airport on August 21. His footsteps down the stairs from the plane, his dreams, his life journey, his visions for his beloved country, the Philippines, have imprinted many of our lives. To signal our support for his ideals of good governance we made yellow paper confetti and tied yellow ribbons on trees, bushes, lamp posts, wherever we could.

I write this today, August 21, as Jun and I have just returned from the 30th Death Anniversary wreath laying at the airport, NAIA, Terminal 3, where there is a memorial bust of Ninoy. The ceremony was impressive, complete with honor guard, the laying of wreaths by 12 organizations and movements including ATOM, LABAN, the Yellow Ribbon Movement, EDSA People Power Commission, the Chino Roces Foundation and the Aquino family. The Ninoy songs – Bayan Ko, Ako’y Isang Mabuting Pilipino, and one of his favorites The Impossible Dream, were emotionally sung by Noel Cabangon and former senator Joey Lina.

Executive Secretary Paquito Ochoa, EPPC Chair, shared some of his experiences and memories of Ninoy, and Senator Bam Aquino responded for the family.

“Ituloy ang laban ni Ninoy” became the battle cry for reforms resulting in EDSA 1. Senator Bam in his message challenged each freedom-loving, justice-loving Filipino to continue this challenge of the yellow ribbons. He said that instead of fighting for freedom from a dictatorship, we are now fighting for freedom from poverty, freedom from hunger, and freedom from joblessness. Here I add we are still confronting the enemies of graft, corruption, dishonesty and disruption of family and moral values.

We all have a role to play in this continuing struggle for a better Philippines. “With every step we take away from hunger, poverty, and injustice, I know that we are carrying on the fight that Tito Ninoy began over 30 years ago,” he said.

I clearly remember the devastation we felt when we heard the news of Ninoy’s assassination. And the tugging of our heart strings at the steadily growing resolve of people to not let his death be the end of Ninoy’s dreams for his country, but rather the beginning of an awakening of the Filipino spirit to meet the challenge of yellow ribbons of freedom, good governance and authentic democracy.

The years pass. Generations come and go. Yet, yellow ribbons continue to challenge us. Yellow ribbons echo the cry of Ninoy to bring about lasting transformation of our society, of the country. Now it is up to us and our children and their children to work toward bringing his dream for a better Philippines to fruition.

(This was delayed in posting because of the monsoon rains that flooded our area and upset internet connection at home.)