THE WOUNDS OF JOSEPH

Gospel contemplation is one of my treasured spiritual practices. Reading scripture, reflecting and becoming part of the scene/event always opens my heart to fresh insights into my own life journey. I find that as I write down these contemplative thoughts in my journal the Lord speaks to me with wisdom and encouragement, helping me keep my life in the right focus and perspective. With the following notes written during one of my gospel contemplations, I hope to inspire you to deepen your spiritual journey using this method as you spend your daily time with the Lord.

The Wounds of Joseph

“And in the sixth month, the angel Gabriel was sent from God into a city of Galilee, called Nazareth, to a virgin espoused to a man whose name was Joseph, of the house of David; and the virgin’s name was Mary.” Luke 1:25-27

“Whereupon Joseph her husband, being a just man, and not willing publicly to expose her, was minded to put her away privately. But while he thought on these things, behold the angel of the Lord appeared to him in his sleep, saying: Joseph, son of David, fear not to take unto thee Mary, thy wife, for that which is conceived in her, is of the Holy Ghost. And she shall bring forth a son; and thou shalt call his name Jesus. For he shall save his people from their sins.” Matthew 1: 19-21

“And Joseph rising from his sleep, did as the angel of the Lord commanded him, and took unto him his wife.” Matthew 1:24

My 19th annotation Gospel contemplation after the Christmas of 2012 took an interesting turn as I passed the incarnation narratives. Unconsciously, I began reflecting, journaling more and more about the role and mind of Joseph. As a husband for 32 years and father myself (of a soon to be lawyer son, 26 and a soon to graduate psychology major daughter, 19) it was no surprise to embark on a spiritual journey with an ordinary carpenter with an extraordinary role planned by God.

Like Joseph my story begins with a dreamy eyed betrothal to a gentle, petite virgin seemingly defenseless and awash with innocence. Almost 6 feet tall, athletic and well-educated I felt I was ready to assume my role as defined in my name Ramon, which means wise and mighty protector.

Perhaps the similarity of story ends there as Mary’s story begins with the Annunciation. My first sense is seeing Mary in a dim candle lit room in prayer kneeling, which is disturbed by a gentle but distinct breeze caused by fluttering. Not like the fluttering of dozens of doves in St. Peter’s square as my young son of 5 then would chase them. But the sound of heavier flutter of powerful wings but gently descending, as those of the angel Gabriel. What astounds me is the action of grace from Mary from the acceptance of an overwhelming role as mother of the son of God.

But almost immediately, I think of Joseph, (despite the appearance of an angel in his dream) whose ordinary world dramatically changes with his initial personal acceptance of the Divine plan. An ordinary man, although of the house of David, whose mind and heart now races, coping with the demands of an extraordinary call, as the human, adoptive father of the son of God. What an immense burden on his shoulders as he ponders his resources, his experience and capability to step into that role. What part of his manhood will he impart to Jesus? What were his thoughts of his fatherly role? What games will they play? What skills will he teach? He will certainly not just stand by. There surely is a part of him that he must give. How did he see Jesus’ future role? What about his role in making sure that came to be? I try conversing with Joseph and ask him these questions. His reply was, ‘He gave of who he was. He did not try to be more than that. But he certainly gave his whole life to Jesus and Mary.’

Times are not easy. Joseph realizes the oppressive situation surrounding the new family. They are overly taxed making it a challenge to make ends meet. The occupying Romans make it no secret how cruel they are to the population. Life is cheap. But not these two lives entrusted to him. How would he raise the son of the most high in these oppressive times? 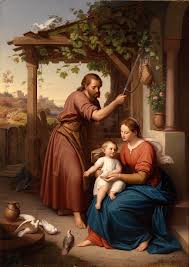 Next, I see Joseph mapping out in conversation with Mary the whole trip to Bethlehem. As he weighs the costs, risks, efforts, inevitability of not being able to put off this response to the census despite Mary’s being in her 9th month, I feel the confidence Mary has in Joseph as he discusses the plans. I also feel the warmth between the spouses. Joseph is certainly love struck in caring for his family. With all his assurances, the trip is set.

My next reflection brings me to the Nativity scene as a sheep. I sense the cool mist of the peaceful evening surrounding the manger with the baby Jesus face aglow. I see Joseph leaning on his staff beholding him in awe. I could sense his love, responsibility and protection for the Holy Family growing leaps and bounds. With all these awesome experiences, how did Joseph’s hope and confidence transcend the bleak reality into which Jesus was born into?

Even after finding Jesus in the temple after being lost for 3 days, Joseph feels most of all, the pain of an adoptive human father. After spending years of fatherly bonding and dedicated caring, he is firmly reminded that Jesus had to be in his REAL Father’s house! How that must have been a thorn in his human heart despite knowing fully he had to accept that humbling truth.

On our dining room buffet table is a porcelain rendition of the Holy Family’s flight into Egypt. As I look into it, I focus on Joseph’s figure in a concerned loving gaze at Mary and baby Jesus riding atop a donkey as the fierce desert winds blow their garments. More wounds of Joseph, as a father surface. All his worse fears for the family appear. With a warning from an angel he is spurred into immediate action and obedience to avert destruction of the very precious lives in his care. I myself am thrust into those intense feelings as I saw a parallel into my own characterization of Joseph as the protector of my family. A deep family crisis descended upon my young family. It was being torn apart and I had no resources to turn to except God and prayer. I saw and recalled my loneliness as this darkness raged leaving me no choice but to be the only shock absorber of massive doses of misdirected anger and pain. In the midst of this storm, all I could hear was God calling me to obedience and forgiveness. It was a battle that could only be won with a love I never thought possible existing within me for my family. God truly expands our heart’s capacity to love and forgive. When the dark clouds over our family lifted, 7 long years of affliction had passed. Our ‘flight to Egypt’ had ended and our family faced a new and vibrant life.

I was wounded in many ways and now I see the Lord in this prayer period as touching and opening these old wounds for the purpose of complete healing
(just like bones which are not set right, needing to be broken again in order to achieve the correct setting).

I felt physically weak all over struggling to continue, wanting to quit. But I just kept sensing the Lord encouraging me to stay the course and not give up a single minute.

The hour-long prayer finally ends and I am exhausted but confident with the process undergone and my effort to obey and stay. I know this process will bear fruit.

Now, I see it was no accident that I was led to journey with Joseph as the wounds of a father can only be sensed by another human father as well . But human as Joseph may have been the grace that surrounded him filled him with a love he never thought possible to love fully the son of the Most High and the Queen of Heaven.

Thanks very much, Mr. Ronnie Caballero, for this touching contemplation on St. Joseph. I’ve always wanted inputs about him. My son Butch, daughter-in-law Ezra, and I were sponsored to breakfast meeting at Orchard by Rodel and Janet Manalo on March 9. We were hugely blessed! More power to BCBP!