The 2011 Masters at Augusta, first Major tournament of the year, has just ended. Consider this a sequel to the column I wrote last year that told the story of an amazing win by Phil Mickelson whose wife Amy was recovering from cancer.

Let me try to compare the fortunes of young Rory Mcllroy (22 years old) who led by a whopping 10 shots at the start of the final round to Charl (not Charles) Schwartzel (26) who TRAILED by 4 shots. By a bizarre twist of events, Schwartzel won. Charl who? Schwartzel who? – some would ask. They never saw him coming. Looking back from 2010 to date, most of the Majors have been won by people whom nobody saw coming – and with names that are hard to pronounce properly, let along spell properly – such as Graeme Mcdowell at the US Open and Louis Ousthuizen at the British Open. And Charl Schwartzel. From the usual batch of poster boys, only Jim Furyk was the one of the few popular Major winners when he bagged the Fedex Cup and PGA championship. No Tiger, no Sergio, no Phil.

As far as young Mcllroy is concerned, I was led to search for answers and perhaps I saw it in 1 Corinthians 10:12-13: So, if you think you are standing firm, be careful that you don’t fall! No temptation has overtaken you except what is common to mankind. And God is faithful; he will not let you be tempted beyond what you can bear. But when you are tempted, he will also provide a way out so that you can endure it.”

Rory’s lead was much televised. At the end of the third round he being bannered as “The next and youngest Masters’ champion?” The question mark was well deserved! This was NOT the final round yet. I chose Corinthians because I am still trying to fathom what temptations ran in the young golfer’s mind at the end of the first round. Perhaps complacency, maybe over confidence, that are, in a way forms of temptation. Then the next morning at the start of the second round, what temptations in turn, entered his head? Fear? Loss of confidence? I saw this as lack of self control and discipline.

Charl Schwartzel, one of the more unpublicized players, suddenly became the focus of TV coverage in the final round. Questions and remarks such as, “Is he still in contention?” “Charl who?” “I have never heard of him before.” Indeed no one saw this unassuming, humble, but careful and deliberate golfer coming. How could they notice him? His best finish before this victory was tieing for 14th at the past tournament, the Honda classic. He had no fear of at all because he had nothing to lose anyway and everything to gain. Like the Biblical description of the undetected “thief in the night” Schwartzel stole the title from the big names of Woods, Mickelson, Vijay Singh.

Believe it or not, Schwartzel is called “the Peaceful Warrior” by some website (try to Google his name). In the PGA profile section, he says his idol is Angus Buchan, a Scottish South African farmer who became an evangelist. All these great men just described here had perhaps displayed common qualities. They were/are passionate about the mission they were to accomplish. They practiced diligently. They endured the hard work needed to achieve their goals.

Schwartzel started his final round with chip in birdies and an eagle. He bogied the fourth to remain one behind – a feat unprecedented in the Masters’ 75-year history! He was ONE behind until hole no 15 when he birdied the last four holes! – to beat Scott and Day by two holes. No wonder no one saw him coming. But now I’m certain I’ll see him soon on the cover of Golf Magazine. 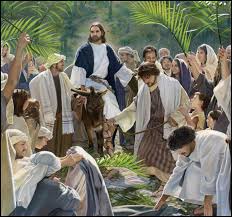 In my reflections this Easter season, I realize that no one saw Jesus as Messiah and Risen Christ coming either. At least not until he entered Jerusalem majestically on Palm Sunday. Even then he rode on a humble donkey. He was ecstatically welcomed by probably the same chaps whom barely days later, jeered him as He carried his cross to Golgotha. Pilate and the Romans apparently had the “lead”. World Conquerors, Christian persecutors. Jesus was almost beaten to death but He won the end game. He persevered till the final day and, Yes, today we have Easter. And Rome became the center of world Christianity.

All this leads me to conclude that life may be compared in many ways to a golf game. How’s your game of golf these days? How is your life?