TRUTH OR LIES: A PARENTING CHALLENGE 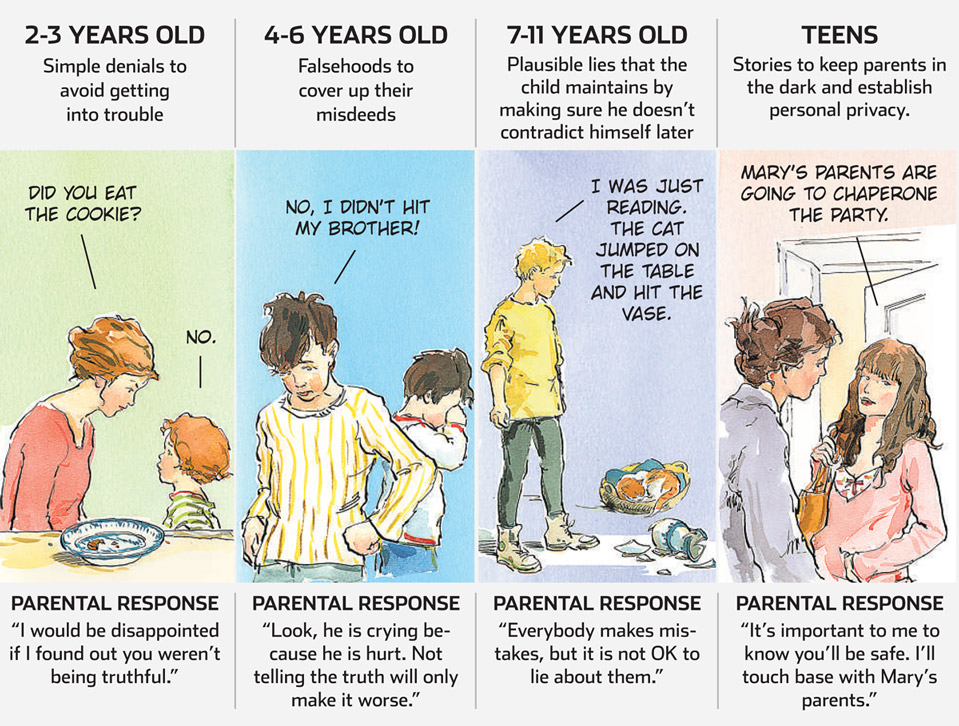 Fibbing is an all-too-common childhood malady that parents naturally desire to curb. No one wants little liars at home to turn into big liars out in society, so the Wall Street Journal’s work and family columnist, Sue Shellenbarger, offers some practical advice on the subject. (No droll quips about WSJ being a Murdoch paper, please).

She presents scientific evidence that lying is part of normal child development, which starts as early as age two.

More than one-third of 3-year-olds will lie to keep from getting in trouble, based on research led by Victoria Talwar, an associate professor of developmental psychology at McGill University in Montreal. By ages 4 to 7, more than half of children will lie to avoid punishment … or to gain attention or approval; the same pattern appears in studies in Britain, West Africa and China.

Shellenbarger claims that parents are “remarkably bad” at spotting falsehood in their children, even offering stats on detection rates: roughly 50 per cent for lying 3-year-olds, to as low as 25 per cent for prevaricating teens. Since every person and family relationship is unique, however, I would be skeptical that this is actually quantifiable: some kids are better liars than others, and some parents are more intuitive than others. It helps if you know your children well, have a good relationship, and are involved in your children’s lives (minds and hearts, not just schedules). Shellenbarger also offers suggestions about how to recognize when habitual lying becomes serious and when to get help.

She notes that researchers are looking more closely at patterns of childhood lying, hoping to understand its role in cognitive and moral development. The results of behavioral experiments are applied to court cases and investigations of bullying and other problems. Even though lying is an “expected behavior” among children, it is, to no one’s surprise, parents who influence whether it “tapers off or escalates”.

Parents do this both by using appropriate responses/punishment for lying (harsher is not necessarily better), as well as — far more importantly — consistently modeling truthfulness. Ay, there’s the rub: from “calling in sick” when they’re not, to fudging tax returns, to falsely praising the cook for a tasteless dinner, adults frequently fail everyday tests of honesty and integrity.

THE HOLY SPIRIT AND PRAYER