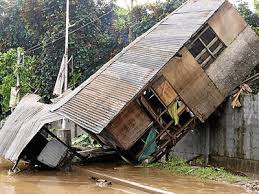 I am still in a quandary on what to write in my column in the New Year. Perhaps, it has something to do with what Typhoon Sendong has done to our city, the birthplace of my mother and to nearby Iligan City. Just like in an earthquake, there are recorded after-shocks and perhaps, I’m still in the state of emotional shock. It is a fact and psychological studies show that for a Post Traumatic Stress Disorder to occur in a person’s life, one doesn’t have to be hit directly. Meaning, PTSD may be experienced also by someone even if he/she is indirectly involved.

What has Sendong done to our lives? In terms of lives lost, thousands have been counted. Damage to properties ranges from totally wrecked houses whether owned by the rich or the poor, to both old cars and new SUV’s being totally damaged. Psychologically, I have listened to survivors’ testimonies, young and old alike, adrift on the sea for six to eight hours who were rescued several miles away from the shore. One eight-year old boy was rescued clinging to a refrigerator; others survived clinging to tree branches with snakes beside them that were also fighting for survival. All these events and experiences, we have seen and heard them both from relatives and friends.

E-mails have been sent to colleagues abroad and they’ve responded positively. Of course the Brotherhood did its share from the national down to the different provincial and local chapters by sending financial aid. As of this writing, BCBP East and West of Cagayan de Oro took the lead in putting our vision and mission, caring and concern, into action. We have conducted two medical missions with brothers and sisters who are doctors and nurses and other allied medical field members joining the team. Others distributed food and clothing. The full essence of altruism was truly visible in action.

Truly the psychological, mental and emotional traumas still haunt me. The DOH psychosocial crisis team was in town together with my son who is currently having his psychiatric residency in Cebu rendering “stress debriefing” to survivors. I thought I, too, needed one.

The other day we observed the feast of the Epiphany. The three kings followed the star of Bethlehem and found the Messiah. We in the Brotherhood also followed the star and found the Messiah. The three kings in coming back to their respective kingdoms did not use the same route but took a new one for fear of Herod for they knew his intentions. We, in the Brotherhood also took a new route after encountering Jesus. We made a commitment not to go back to our old self and so we took a new self, a new road- the road less traveled.

Sendong has changed so many lives. I don’t know how or what but, definitely, it has and will change US, Cagay-anons for the better. The battle cry “BANGON CAGAYAN “ is infectious. We have to move on, pick up the pieces, and burn the ships like what the great Alexander did to conquer an island. The constant desire to accept the altruistic challenge to help our neighbors who are in need is very evident, in fact contagious.

According to Ralph Martin, author of “Hungry for God“: “Truly these are amazing times. The tempo of God’s action is increasing and the stakes – salvation of the race – are emerging undisguised.” The BCBP brings and wins the marketplace for Christ. To accomplish it, we must take the lead. “We must be one in union with God and accustomed to hearing His voice.“

MAYBE, just maybe…..SENDONG…..woke us up.

HOW DO YOU ENVISION THE BCBP IN 2020 AND BEYOND?

THE INSPIRING STORIES OF 3 SENDONG SURVIVORS