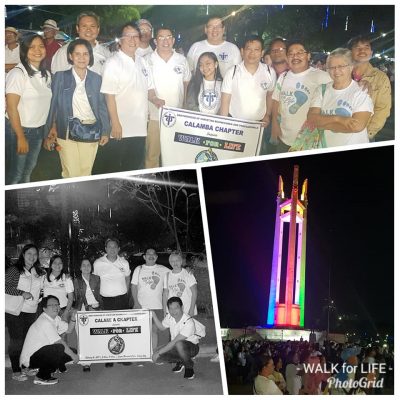 Members of the Brotherhood of Christian Businessmen and Professionals joined thousands of Catholic faithful belonging to various lay organizations in the 2019 Walk for Life in in Quezon City last February 16.

Delegates from various BCBP chapters in Metro Manila and nearby provinces (some coming from the Southern Tagalog Region) trooped to the Quezon Memorial Circle, showing their solidarity with the Sangguniang Laiko ng Pilipinas and the Catholic Bishops Conference of the Philippines (CBCP) in its call for protection of life and Christian values.

“It was a filled-spirit predawn Saturday as we marched together with Catholic and other Christian organizations. We started the ceremony by honoring our Mother, solemnly prayed the Holy Rosary followed by apportion of inspiring life testimonies from different groups and ended with Eucharistic mass. We were blessed to be part of this initiative,” said the BCBP Calamba in its Facebook page.

Southern Tagalog Region Area Managing Director Rene Medrocillo and Senior Leaders Council Director Angel Sabas were among those who participated in the Walk for Life.

The event also served as a platform for the the bishops to call on Filipinos to vote with discernment in the upcoming midterm elections.

Manila Auxiliary Bishop Broderick Pabillo expressed hope that the “people power and prayer power” the participants during the Walk for Life would translate into vote power. He appealed to the public not to vote for candidates who support death penalty, the lowering of criminal liability age, and those who are mere sycophants of those in power positions.

But he clarified that the Church is not telling the people who to vote for, but only giving guidelines on the “character and values” of candidates deserving of the Filipinos’ votes.

The Walk for Life is an annual event spearheaded by the Catholic Church to remind the faithful of their duty to uphold and nurture life, which is being threatened by the creeping culture of death.

In his homily at the Eucharistic celebration during the event, Manila Archbishop Luis Antonio Cardinal Tagle appealed to the public to promote life, saying it is a gift from God which must be protected.

Archbishop of Manila Luis Antonio Cardinal Tagle celebrates mass during the “Walk for Life,” a solidarity campaign against human rights abuses, at the Quezon Memorial Circle on Saturday, February 16, 2019. In his homily, Tagle appeals to the public to promote life, which he says is a gift from God. REUTERS/Eloisa Lopez

Cardinal Tagle also reminded everyone to respect women who deliver life to this world, and once again, condemned “extrajudicial killings.” — With reports from GMA News 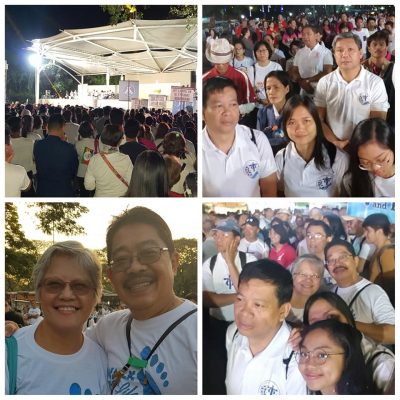