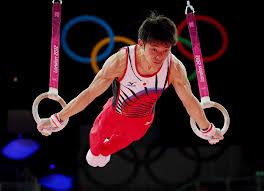 These past weeks most of us have been watching the Olympic games taking place in London. I love to watch the swimmers, the gymnasts, the volleyball games and the divers especially. I marvel at how they keep their bodies in shape for such strenuous sports! The hours they must spend in practice … the attention to their diets … the hours at the gym getting themselves in shape! WOW!

As I viewed the different Olympic contests and listened to the stories behind some of the athletes, I was amazed to learn that a 39-yr-old man competing in the Lord of the Rings event had competed in the last 4, or was it 6, I disremember, Olympics also in that event! It seems that age matters less than determination to keep in shape! 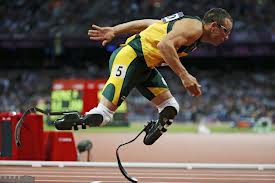 I watched a man, whose legs had been amputated at ll months old and fitted with metal legs, run in the 400-meter event. Even though he was only a few seconds slower than the winner of the heat, thus not making the finals, he was such an inspiration to everyone who watched him, sending the strong message that being handicapped (whether physically or otherwise) doesn’t matter if one is determined to overcome such disability.

Then I watched the story of the elderly man who pedaled his rickshaw all the way from somewhere in China across the continent of Asia, passing through 16 countries, to London just so he could watch the Olympic games in person. He spoke no English, only his native language, and yet reached the games on time. What courage, stamina, and perseverance!

It’s a real challenge for us “normal” human beings to meet the daily challenges in our lives, to eat properly, to exercise regularly, and in general, to feel good about ourselves in the face of all the media messages spotlighting our flaws. Advertising campaigns point out that we are either too fat or too thin, that our hair is either too straight or too frizzy, that our faces have too many wrinkles or too many age spots, that our waists and hips are either too skinny or have too many bulges in the wrong places, that we would look better, younger, and sexier if we used this or that lotion, cream or soap, that we either have too much or too little energy.

But after watching the Olympics I realize that what is most important is not our age, or what cosmetics we use, or what we eat, or the vitamins we take. What is more important is our attitude, our willingness, determination and perseverance to achieve our dreams, our goals in life.

None of us is perfect. None of the Olympic medal winners was perfect, but they all attained their goal of representing their countries in the games through their determination, their willingness to discipline themselves, their perseverance despite difficulties, and their attitude of seeing obstacles as a challenge to overcome.

We can all be medal winners in the arena of our own lives … if not the gold, then silver or bronze. It is our choice – to compete for the medals or to sit back and watch others. As for me, I am striving for the gold.