WHAT ARE THE PILLARS IN YOUR LIFE? 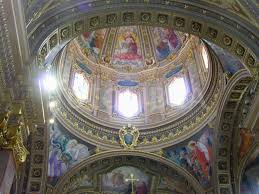 How many false pillars have we built that have no significance to our life and our relationship with Jesus?

Famed English architect Sir Christopher Wren designed a large dome for a church that was so unique he became the object of much criticism among his colleagues. During the construction of this dome they created so much fuss that the authorities demanded Wren add two huge supporting pillars to keep the dome from collapsing. Wren bitterly objected, insisting on the strength of his structure and the wisdom of his new architectural innovation. Besides, it would ruin the beauty and aesthetics of the church. But the opposition was well-organized and powerful. The two pillars were added to the design over Wren’s objections.

Fifty years passed since the construction of the controversial dome. It was now time to repaint the interior of the church, as well as the dome.

When the painters had erected their scaffolding to begin the painting they made the startling discovery that the two added pillars did not even touch the dome! There were short by two feet!

Sir Christopher Wren had such confidence in his work that he made sure the offending pillars were freestanding. The authorities, during his lifetime, came to make their inspection from the floor, saw the pillars, and assumed they reached the roof. They now felt secure, even though the pillars were freestanding and didn’t support anything! Wren went to his grave with his little secret well-kept. I believe he may have had the last laugh at their expense. What a great little story!

Man has built many pillars to support his little world and to keep things from falling in on him. Often they seem strong and are able to stand the stress of time. But often they are just as useless as architect Wren’s false columns.

Some have constructed pillars of religion, beautiful in structure and they seem strong enough. But religion is totally meaningless without the person of Jesus. Pillars of religion are freestanding without Christ and have no hold on eternity.

Others have erected pillars of intellectualism, money, pleasure, or philosophy. Lest we despair, there is a structure that is ample for the ultimate crisis of life. As Wren had confidence in his architectural creation, so can you have confidence in the structure God’s builds!

I am sending Christ to be the carefully chosen, precious Cornerstone of my church, and I will never disappoint those who trust in him. 1 Peter 2:6

Reference: “Pillars” (as sent by Nelly V.) from Moments to Cherish by Robert Strand