WHAT WAR ARE WE FIGHTING? 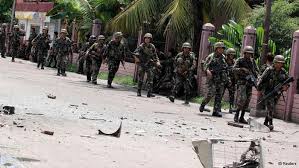 The Zamboanga conflict. The war in Syria. The battle against hunger and poverty in areas throughout the world. The unending clashes arising from religious and faith differences. What war are we fighting?

Pope Francis in his September 8 message after praying the midday Angelus posed this question: “What point is there to fighting wars, many wars, if you are incapable of fighting this deeper war against evil?” He says there is a much deeper war that we must fight. “It is the tough and courageous decision to reject evil and its seductions and to choose the good, ready to pay personally. This is carrying our cross!”

He admits that there are indeed wars everywhere but asks if such wars are over real problems, or are they “commercial wars” with hidden agendas, like to sell illegal weapons. “Yes, there are enemies to fight, [but we must fight] unified and with consistency, with no other interests at heart but those of peace and the common good.”

In a Zenit.org release (Sept. 10), Dr. Edward Mulholland agrees with Pope Francis. He quotes Alexander Solzhenitsyn who once remarked that the line between good and evil does not run along the borders of countries, but runs through the human heart. “We are all called to combat evil in our lives, the evil of sin that threatens to separate us from God for all eternity, in what is the most devastating defeat possible.”

Mulholland says that “if we engage in any other conflict whatsoever, and disregard this most fundamental one, we are doing something supremely stupid. We are wasting our time. … It would be wrong of us to engage in any debate about the morality of any conflict unless we are firmly entrenched in the combat against sin in our lives.”

Prayer and the Sacraments are essential elements in our war for peace. Pope Francis calls for continuing prayers for peace, both individual prayer and community prayer. As members of the Church militant, we are soldiers in the army of Christ against the enemy of evil. As members of the BCBP community, although we are not soldiers per se, we are in the fight for truth and honesty in our marketplaces as well as in our lives. Therefore, the issue we must face is: what war are we fighting and why?

LIVE A LIFE THAT MATTERS