WHERE IS THE STAR TODAY?

Pope’s Homily for Today’s Feast of the Epiphany
“The wise men represent men and women who seek God in the world’s religions and philosophies: an unending quest”

VATICAN CITY, January 06, 2015 (Zenit.org) – Here is a Vatican translation of the homily Pope Francis gave this morning at Mass for the feast of the Epiphany in St. Peter’s Square. 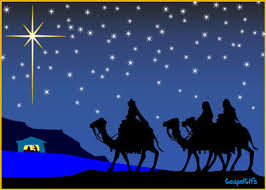 That child, born in Bethlehem of the Virgin Mary, came not only for the people of Israel, represented by the shepherds of Bethlehem, but also for all humanity, represented today by the wise men from the East. It is on the Magi and their journey in search of the Messiah that the Church today invites us to meditate and to pray.

These wise men from the East were the first in that great procession of which the prophet Isaiah spoke in today’s first reading (cf. 60:1-6): a procession which from that time on has continued uninterrupted; in every age it hears the message of the star and finds the Child who reveals the tenderness of God. New persons are always being enlightened by that star; they find the way and come into his presence.

According to tradition, the wise men were sages, watchers of the constellations, observers of the heavens, in a cultural and religious context which saw the stars as having significance and power over human affairs. The wise men represent men and women who seek God in the world’s religions and philosophies: an unending quest.

The wise men point out to us the path of our journey through life. They sought the true Light. As a liturgical hymn of Epiphany which speaks of their experience puts it: “Lumen requirunt lumine”; by following a light, they sought the light. They set out in search of God. Having seen the sign of the star, they grasped its message and set off on a long journey.

It is the Holy Spirit who called them and prompted them to set out; during their journey they were also to have a personal encounter with the true God.

Along the way, the wise men encountered many difficulties. Once they reached Jerusalem, they went to the palace of the king, for they thought it obvious that the new king would be born in the royal palace. There they lost sight of the star and met with a temptation, placed there by the devil: it was the deception of Herod. King Herod was interested in the child, not to worship him but to eliminate him. Herod is the powerful man who sees others only as rivals. Deep down, he also considers God a rival, indeed the most dangerous rival of all. In Herod’s palace the wise men experience a moment of obscurity, of desolation, which they manage to overcome thanks to the prompting of the Holy Spirit, who speaks through the prophecies of sacred Scripture. These indicate that the Messiah is to be born in Bethlehem, the city of David.

At that point they resume their journey, and once more they see the star; the evangelist says that they “rejoiced exceedingly” (Mt 2:10). Coming to Bethlehem, they found “the child with Mary his mother” (Mt 2:11). After that of Jerusalem, this was their second great temptation: to reject this smallness. But instead, “they fell down and worshiped him”, offering him their precious symbolic gifts. Again, it is the grace of the Holy Spirit which assists them. That grace, which through the star had called them and led them along the way, now lets them enter into the mystery. Led by the Spirit, they come to realize that God’s criteria are quite different from those of men, that God does not manifest himself in the power of this world, but speaks to us in the humbleness of his love. The wise men are thus models of conversion to the true faith, since they believed more in the goodness of God than in the apparent splendour of power. 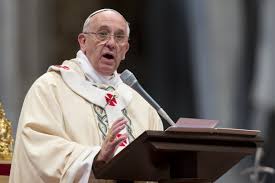 And so we can ask ourselves: what is the mystery in which God is hidden? Where can I find him? All around us we see wars, the exploitation of children, torture, trafficking in arms, trafficking in persons… In all these realities, in these, the least of our brothers and sisters who are enduring these difficult situations, there is Jesus (cf. Mt 25:40,45). The crib points us to a different path from the one cherished by the thinking of this world: it is the path of God’s self-abasement, his glory concealed in the manger of Bethlehem, on the cross upon Calvary, in each of our suffering brothers and sisters.

The wise men entered into the mystery. They passed from human calculations to the mystery: this was their conversion. And our own? Let us ask the Lord to let us undergo that same journey of conversion experienced by the wise men. Let us ask him to protect us and to set us free from the temptations which hide the star. To let us always feel the troubling question: “Where is the star?”, whenever – amid the deceptions of this world – we lose sight of it. To let us know ever anew God’s mystery, and not to be scandalized by the “sign” which points to “a babe wrapped in swaddling cloths, lying in a manger” (Lk 2:12), and to have the humility to ask the Mother, our Mother, to show him to us. To find the courage to be liberated from our illusions, our presumptions, our “lights”, and to seek this courage in the humility of faith and in this way to encounter the Light, Lumen, like the holy wise men. Amen.

A REVOLUTION OF TENDERNESS