WHERE IS YOUR KING? 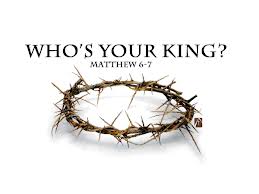 “When Jesus was born in Bethlehem of Judea, in the days of King Herod, behold magi from the east arrived in Jerusalem, saying, “Where is the newborn king of the Jews?” We saw his star at its rising and have come to do him homage.” Matthew 2:1-2

As I sat in my office chair last January 11th pondering my Retreat in Daily Life Gospel Contemplation on Matthew 2 I felt as a fresh breath of air suddenly hit me. The phrase “newborn king of the Jews” which seemed around for ages as far as I can remember, stood out as bright as day. The magi from the east, people regarded in biblical times as having more than human knowledge, declared and saw Jesus as a newborn king of the Jews.

I stopped and took a breath again. How many ‘people’ in history do we know are born king? Of recent history we know of Prince William of the United Kingdom is born TO BE KING. We basically know that people are born princes, raised carefully, educated, trained to love his people, to reign with wisdom and in many ways to be graceful, measured in all movements and behavior at a cut above the rest. Born with a silver spoon, he is used to royalty and splendor, an icon of the people to be revered and respected. He is made aware of a long line of revered predecessors whose memory should not be tarnished and that the pressure of having to live up to these expectations is tremendous. I am sure there must be ‘royalty’ specialists or even royalty manuals developed over many centuries of kingship practice. Even media carefully consults such standards if they see behavior not in accord to royalty and deliver criticism as such. After years of rigorous practice, training and minute observation does a prince finally become worthy of having a King’s crown rest on his head.

But in Jesus’ stature, born king and worthy of being given homage, I certainly see a spectacular aspect of our Lord’s coming into this world. Being BORN KING signifies an inherent quality already existing EVEN in infancy. This already signifies a Kingship that is not of this world. In the human world, infant or toddler heirs to the crown are under the care of regents. However, not once in the Bible is the kingship doubted nor placed under care, showing full confidence in the role given to Jesus.

In later times, we have seen Jesus’ capability way beyond human expectations. We see him astounding the Pharisees and scribes with his knowledge at the temple as a young boy of 12 not just for a few minutes but for 3 days. We see him at the beginning of his ministry likewise impressing many with his deep knowledge, making people wonder aloud how a carpenter’s son be suddenly possessing wisdom of the years and of sacred scripture.

King Herod upon listening to the magi proclaim, “We have seen his star”, also acceded, “When you have found him, bring me word, that I too may go and do him homage.” He also recognized the common ancient belief that a new star appeared at a time of a new ruler’s birth. These wise men brought a certain message to which he reacted, a true challenge which he felt was a threat to his kingship. No doubt Herod read from the faces of the magi, truth about the existence of a real King. This truth can be ascertained from the lines that followed. “They were overjoyed at seeing the star, and on entering the house they saw the child with Mary his mother. They prostrated themselves and did him homage. Then they opened their treasures and offered him gifts of gold, frankincense and myrrh.” Matthew 2:10-11

The early fathers of the Church seem to be reaching out to us through the centuries as we are a people now far removed from kingship and royalty. They bring to us a reality that we must live and ponder, “Where is your King?”

Does He truly live and reign in your life? If so, does His existence bring alive what the magi felt for Jesus, the newborn king?

Are we overjoyed in His presence? Do we prostrate ourselves in worship and humbly do him homage recognizing his overwhelming authority over our lives?

Do we open up our treasures, recognizing that every bit of ourselves that we offer to him will redound to our ever encompassing welfare unknown to many kingdoms, governments or nations or political systems of this modern world?

Do we give of our best, of our core and not just of our excess or spare change, recognizing His great love for us will find us not wanting in this world nor in His eternal Kingdom.

“Where is your King?”

I love this to be a king reveal I am a grandson of GOD called Rashua or may be RASUS CHRIST as a admirer of intelligence along with JESUS CHRIST a savior of the world in many days of “Age of Aquarius”. We are the grandchildren of christ among our core and not just of our excess or spare change both encompassing welfare unknown to many kingdoms, governments or nations or political systems of this modern world. Honesty must be done not once in the Bible is the kingship doubted nor placed under care, showing full confidence in the role given to Yahweh(father) Jesus (son) & Rasus (grandson).