WHY DOES MARY HAVE MANY TITLES?

Why Catholics honor Mary with many Titles (Origin of the Titles) 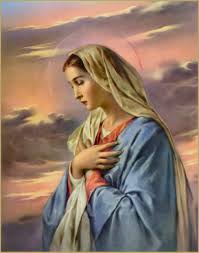 We find these terms in the Litany of the Blessed Virgin Mary (specifically the Loreto version), which was composed in the mid-16th century. St. Peter Canisius (d. 1597) popularized the litany in 1558 when he published it to foster devotion to our Blessed Mother in response to the Protestant “Reformers” who had attacked such devotion. The litany represents a compilation of titles praising our Blessed Mother that were used at services at the Shrine of Loreto in Italy from the thirteenth century.

Most of the titles in question are associated with the prophecies and symbolism of the Old Testament which foreshadow the role our Blessed Mother played in the mystery of salvation. Several of these center on her sanctity and maternity. For instance, the Tower of David stood prominently and strongly on the highest summit of the mountains surrounding Jerusalem. Such a tower was part of the defense mechanism of the city. From it, warnings would be given of approaching enemies. Mary is compared to the Tower of David because of her holiness, being recognized as full of grace and having been conceived free of original sin. By her prayers and example, she is part of God’s “defense mechanism” by which the Kingdom of God will stand undefeated and sin will always be conquered. ( Song of Songs, 4:4.)

Similarly, Mary is also called the Tower of Ivory. This term is also used in the Song of Songs (7:5) to describe the beloved bride. (A similar term, Ivory Palace is mentioned in Psalm 45, verse 9, for the same reason.) Both instances foreshadow the nuptial relationship between Christ and his bride, the Church, as conveyed in St. Paul’s Letter to the Ephesians. Here though we remember, as Vatican II taught, that Mary is “a type of the Church”: She conceived by the power of the Holy Spirit and through her, our Savior entered into this world. As such, “The Church indeed contemplating [Mary’s] hidden sanctity, imitating her charity, and faithfully fulling the Father’s will, by receiving the Word of God in faith becomes a mother” (Lumen Gentium, #64). 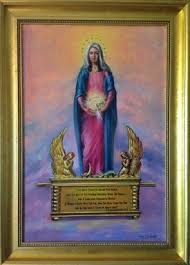 The role of mother is particularly clear in the term Ark of the Covenant. Remember in the Old Testament the Ark of the Covenant housed the Ten Commandments, the Law of God. As the Israelites journeyed to the Promised Land, a cloud, signifying the presence of God, would descend upon or “overshadow” the tent where the Ark was kept. Jesus came to fulfill the covenant and the law. In the Annunciation story, Archangel Gabriel says to Mary, “The Holy Spirit will come upon you and the power of the Most High will overshadow you” (Luke 1:35), conveying the same notion. Therefore, Mary “houses” Jesus in the womb; she is the new “Ark.”

From this foundation flow the other titles: Jeremiah predicted that the Messiah would be named, “The Lord our Justice” (23:6); Mary is the Mirror of Justice because no one better reflected the love and devotion to our Lord in His life than Mary. Because of her pure love and because she “housed” Jesus, she is called House of Gold. Jesus is the Wisdom of God, “the Word who became flesh and dwelt among us” (John 1:14); therefore, Mary, who bore our Lord, is called Seat of Wisdom. 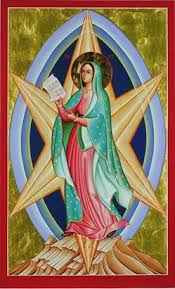 For us, Mary is also a sign of great hope. Vatican II stated, “The Mother of Jesus in the glory which she possesses body and soul in heaven is the image and beginning of the Church as it is to be perfected in the world to come. Likewise, she shines forth on earth, until the day of the Lord shall come, a sign of certain hope and comfort to the Pilgrim People of God” (Dogmatic Constitution on the Church, #68). For this reason, she is called Morning Star, because she is a symbol of the victorious Christian who perseveres in faith, and shares in Christ’s messianic authority and victory over the darkness of sin and death. The term is found in the Book of Revelation (2:26-28): “To the one who wins the victory, who keeps to my ways till the end, I will give authority over the nations– the same authority I received from my Father. He shall rule them with the rod of iron and shatter them like crockery; and I will give him the morning star.” Also in Songs of Songs (6:10) we find, “Who is this that comes forth like the dawn, as beautiful as the moon, as resplendent as the sun…”; as the brightness of a light penetrating the early morning darkness, Mary heralds the coming of her Son, who is the light of the world (cf. John 1:5-10, 3:19).

She too is the Gate of Heaven. Mary is the means by which our Lord came down from heaven to free us from sin. At the end of her life, we believe that Mary was assumed body and soul into heaven, a fulfillment of everlasting life and the resurrection of the body promised by Jesus. Therefore, she is the gate through which Jesus entered this world, and gate of fulfilled promise by which we will share everlasting life.

Therefore, we look to her as the Star of Sea. As a star guides the sailor on the stormy sea to safe port, so Mary, through her prayer and example, guides us along our journey of life, over sometimes turbulent water, to the heavenly port.

In all, Mary is the Mystical Rose. The rose is considered the most beautiful flower, the flower of royalty which surpasses all others in fragrance. A rose has a delicate bloom supported by a strong stem with thorns for defense. Similarly, our Blessed Mother’s soul reflects the love of God, while her person represents a strong woman of firm faith conviction ready to defend the Lord. She has the sweetness of sanctity and the beauty of virtues.

In sum, all of these titles remind us of the important role of the Blessed Mother in our Catholic spirituality. She is a model of virtue and sanctity as an individual, a spouse, a mother, and a disciple of the Lord. Moreover, she is a sign of the life to come.

PARENTS: WILL YOUR CHILDREN BE HAPPY?

COMPANIES, EXECUTIVE OFFICES CAN BE PLACES OF HOLINESS