WILL YOU BE JESUS’ HANDS AND FEET?

As I listened to the sharings I was reminded of two prophecies, the first one given during our 20th Anniversary in Subic. In Subic, an electrical malfunction caused the sound system and all communications equipment to stand still, be quiet. When the malfunction was fixed, a brother stood up and said: 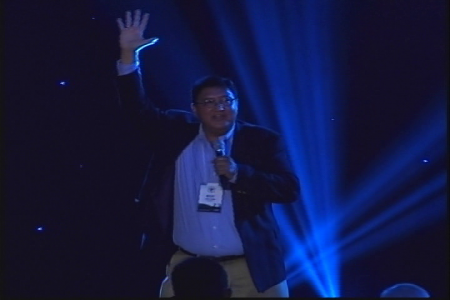 “In the future if people, places or events like this equipment malfunction prevents the BCBP from announcing the good news, prevents the BCBP from shouting to the whole world about the love of God specially to businessmen and professionals, my Brotherhood do not keep quiet but shout all the more, let everyone hear through your loud voices God’s love, continue to witness to others with joy, with victory and with celebration.”

But there is another prophecy given to us, given during our NAC 32 worship assembly in this very same place. The prophecy related the story of group of villages under attack by marauders, bandits that banded together to have strength in numbers. They went out and called on other villages to join them and they formed a kingdom that grew in size and strength until they had strong walls to keep the enemy out. But because of their strong walls and the size of their kingdom, they stopped bringing other villages into the protection of their kingdom, they felt safe, became complacent, and in one attack by the bandits, the strong walls collapsed and the bandits entered their kingdom and killed a lot of people. The remaining survivors barricaded themselves inside the church and prayed to God, “Why did you allow the walls to come down” and God answered, “My people I allowed the walls to come down not for the enemy to come in but for you to move out and bring others who are far off to this kingdom.” My BCBP do not be complacent but move out, move out and bring other businessmen and professionals to My kingdom, take ground, bring people in”.

Brothers and sisters, in this our 35th year, even if we are in 155 business centers in the Philippines, Asia and North America, God tells us not to be complacent, not to look to the past accomplishments but look to the future. He renews his call to all of us to move out, take ground, bring other businessmen and professionals to His Kingdom, to be Brave, Be Bold. ARE YOU WITH ME? LETS SHOUT: BE BRAVE, BE BOLD!

Tonight is a night of celebration but it is also a night of integration, of unity and a call to action. Jesus wants us to make a commitment to Him not only individually but as an outreach, chapter, region, area, as the BCBP Community of committed members.

My AGL for over 8 years, Tito Larry Larrazabal, had a very beautiful cover for his first book entitled “Where Are My Hands and Feet”. The cover came from a true story set in the Spanish revolution in the 1930s. The communist forces occupied a town and in the town center there was a Cross and the communist soldiers shot at the hands then the feet of Jesus on the Cross. When the forces of General Franco liberated the town, one Catholic soldier after seeing the Cross knelt down and wept. He then saw a piece of cloth and wrote “Will you be His hands and feet” and placed it near the Cross.

MY HEARTFELT THANK YOU!

AGM: HOW BEAUTIFUL IS YOUR HEART?

SETTING OTHERS ON FIRE

WITH GOD THERE ARE NO ACCIDENTS