It was still early in the day. The morning sun was still way below the lines of coconut palms across the road from our home. My attention, as usual, was drawn to the sprinkling array of colors on our front lawn, thanks to the unruly zinias that chose to bloom where they want to and to the yellow creeping peanut plants. 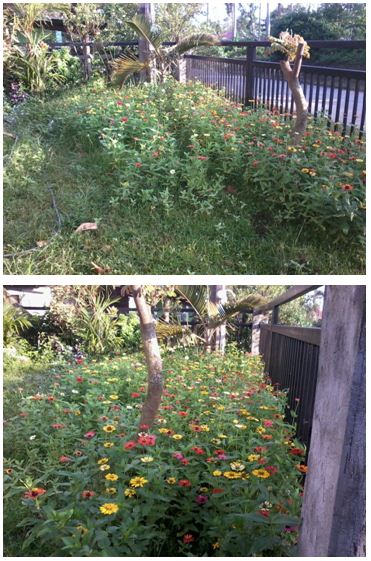 For you to appreciate those zinias, let me give you a background: I got some dried flowers from my grandson Karl’s garden in Tuguegarao City sometime in March 2014. I had the seeds sown in a row along our front fence. Days passed and they grew and soon bloomed and got praises from passersby. Then came typhoon Glenda in August 2014 and it devastated every single plant and some trees along its path. After the onslaught of the typhoon, my youngest son, Jay R, cut the plants hoping that they would sprout. Of course zinias don’t sprout. So when I saw the drying stems of the zinias, I felt sad but I had no option but to pull them out, careful not to damage the three small struggling seedlings hoping that they will regenerate and be parent plants. My husband, Vic, was planning to plant string beans along the fence then. But I discouraged him since I intended to nurture the three struggling plants. But being away from home on weekdays, I was not able to transfer the young plants. So, imagine my surprise when arriving home one day, I saw some seedlings scattered throughout the front lawn! So, Glenda, after all did not destroy the plants, instead, it scattered the seeds of the matured plants to eventually grow, bloom and beautify the front lawn. Now, more people sing out their praises to the beauty of the flowers. Just like the blessings and mercy of our Lord, when He allows something to happen that is not to our liking, have faith, simply have faith and trust to Him everything and boom! more blessings and graces will come pouring down from Him. Today, as in the days passed, I patiently wait for those showers of blessings from Him. I know these will come in God’s great time. 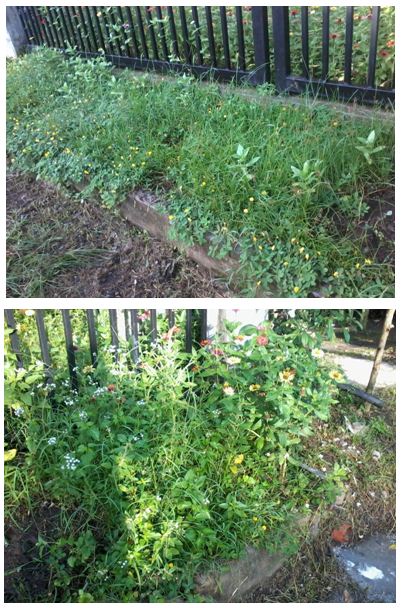 That is how I got the unruly zinias on our front lawn. The house was still quiet since my kids were still in the sleep limbo and my husband could be anywhere within the backyard premises or in the nearby family farm. It was barely 6:00 o clock in the morning, anyway. Holding a cup of still scorching coffee, I stood by the front terrace and noticed that some weeds have grown taller than the zinias. And in some patches, the weeds were very thick that they are suppressing the peanut plants. I thought: if those weeds are not taken out, they will choke the peanut plants and will obstruct the falling seeds from the zinias to reach the soil. At this instance, I recalled the Parable of the Sower from Matthew 13 wherein “A farmer went out to sow his seed.4 As he was scattering the seed, some fell along the path, and the birds came and ate it up.5 Some fell on rocky places, where it did not have much soil. It sprang up quickly, because the soil was shallow.6 But when the sun came up, the plants were scorched, and they withered because they had no root.7 Other seed fell among thorns, which grew up and choked the plants.8 Still other seed fell on good soil, where it produced a crop—a hundred, sixty or thirty times what was sown.9 Whoever has ears, let them hear.”

Well, in the case of the zinias, they fell on fertile soil. And, they are a beauty to behold! I would not want the amazingly beautiful zinias choked to death even before the seeds will reach the fertile soil, so I set my coffee cup on the fence post and started to pull out the weeds. Some weeds have long and stable root systems that I have to pull hard before they were uprooted. So I got a blunt knife from the kitchen and used it to uproot more weeds. While doing so, I recalled that Parable of the Weeds in Matthew 13: 24-43, and I quote:24 “The kingdom of heaven is like a man who sowed good seed in his field.25 But while everyone was sleeping, his enemy came and sowed weeds among the wheat, and went away.26 When the wheat sprouted and formed heads, then the weeds also appeared.”

27 “The owner’s servants came to him and said, ‘Sir, didn’t you sow good seed in your field? Where then did the weeds come from?’

29 “‘No,’ he answered, ‘because while you are pulling the weeds, you may uproot the wheat with them.30 Let both grow together until the harvest. At that time I will tell the harvesters: First collect the weeds and tie them in bundles to be burned; then gather the wheat and bring it into my barn.’”

True, while I was pulling out weeds, I accidentally pulled out some plants as well. So I have to be extra careful. Still pondering on God’s message, I fully appreciate the wisdom of the parable that in God’s great time, the people who lived the life of God will be separated from those who did not, the former will be put into barns (heaven) and the latter will be burned (eternal fire in hell). I would love to be with our Father in heaven. I may tend to the flowers in His garden.

But for now, I cannot afford to let the beauty of the flowers go to waste by the strangling weeds. So I resolved to pull more weeds being extra careful not to damage the zinias and the peanut plants.Since I was working on the garden patch along the road, I also had brief chit chat with some neighbors who were passing by. And, after several ant bites on my arms and feet, and as the tingling sensations on my legs became unbearable, I stood up and looked with pride on the results of my work. Wow, I cleaned up about three square feet! What? You say it is a small feat? Oh well, yes perhaps, unless you are aware that I have to prick weeds careful not to damage the roots of the peanut plants and the young zinias. So a three-square foot of cleaned garden patch is an achievement!

Pleased with what I have achieved, I continued on a patch that was almost covered with weeds. Perspiration erupted on my brows as the sun’s rays started to show its magnificent colors and invade the shadows where I worked. I felt the gentle warmth of the sun ray’s on my back as I continued to dig and remove weeds and roots. Some plants I accidentally uprooted were replanted. As the sun’s heat is beginning to bite, I believed I had done enough gardening for the day, so I ended this morning’s task and proceeded to prepare breakfast. It was a great morning!

Hi Sis Lu! Thank you for sharing your reflection. Continue acknowledging God’s inspiration. Continue writing about these things and sharing them. Be blessed and continue being a blessing to others 🙂